~Cover Reveal & Giveaway~ Runaway 2: On the Run by Aubrey Kendall 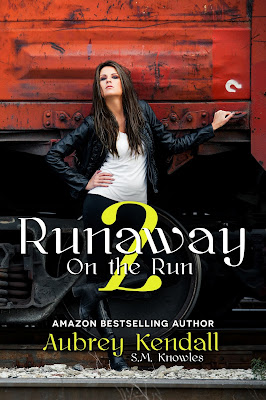 
Braxton, a six foot two God with dark hair and eyes, holds the key to Courtney’s heart. But, it’s not without a price. The son of a drug lord, who has recently killed himself because his time has ran out, left everything he had to Braxton. The problem, Braxton wasn’t told and now that he is beginning his life with Courtney, he doesn’t want what his father left him. However, it’s not about him or her, it’s about a legacy and a group of people who were entrusted to run his father’s estate. Will they catch him and get him to sit on his father’s throne or will he deny what should be his and suffer death?

Here Courtney goes again, on the run and unfortunately it isn’t with the man who swept her off her feet to begin with. The only way to escape deaths door is to become one of them and wait for her hero to come back. Will Braxton ride in on his horse and reclaim his woman or is all hope lost? Power and money control so much and Braxton is about to see for himself what exactly his father laid out for him.

S.M. Knowles wanted to keep her S.M. name separate for her YA Books. Aubrey Kendall is for anything that is not YA or not meant for children to read. She graduated with her Master’s degree in Adult Education and Training in 2012 and is now looking at pursuing her doctoral program. She has been writing since the age of nine, but didn’t pursue publishing until 2013. She lives in Phoenix Arizona with her two daughters and husband.