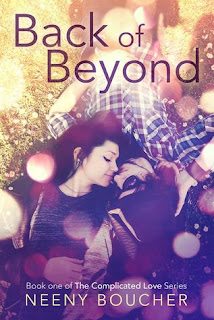 Blurb:
Dina Martin and Nicholas Riley are total opposites.  She’s the good girl with the perfect grades and he’s the bad boy with the reputation.  Growing up together with close family ties, they have been at war for as long as they can remember. When the unthinkable happens, neither of them wants it.

Set in a small town at the turn of the millennium, this story is about family and friendship, the love of music and how sometimes who you don’t want, is exactly who you need.

wow... I am completely blow away by Back of Beyond. I had no clue this book was going to be so epic. Neeny Boucher is an amazing writing, the detail she put into this book did not go unnoticed. I loved the connection between the characters and how so many people in today's society will be able to relate to the issues in this book. I really can't decide who my favorite character is because I really enjoyed them all except for the jocks and Anys, them I kinda wanted to deck but of course I wanted to deck Riley at first too, he was such an ass. Dina is stubborn and hot headed but so is Riley however they seem to be able to cool down after awhile. Gabby is the hilarious, loving, over protective sister every one wants. Back of Beyond was filled with so much drama and excitement. Never a dull moment, once I started, I couldn't stop. It had me laughing and under suspense of what was going to come with each page. You can't help but fall for the characters and relate to what they were going to. Neeny Boucher hit so many issues that teens deal with each and every day, I loved that it brought back memories of my teenage years. The best part was the music reference, I always listen to music when I read because it just sets the groove of the story for me and it made reading Back of Beyond so enjoyable. Def one of my top fave reads of 2016. 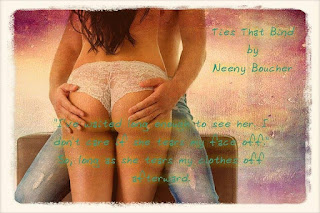 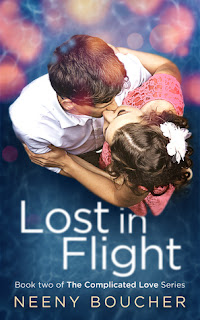 Blurb:
*Recommended for audiences over the age of 18*
If you like your characters quirky, socially awkward, and badly behaved, this is the book for you. What if you got another chance with the love of your life, even when you didn’t want one? Would you grab the opportunity, or run as fast as you could in the opposite direction?
Christina Martin, lawyer, ex high school grunge queen, teenage bride, divorcee, and once a suspected killer, is confronted by a past that she has spent the last eight years carefully avoiding. Drawn back to her hated hometown, with her family under the worst of circumstances, matters are complicated when she finds the love of her life, ex-husband and nemesis, Nicholas Riley, also in residence.
Riley, a man with secrets, who has a penchant for psychological games, made wary by life and with one weakness, his ex-wife. Christina is the woman that brings out all his protective instincts and others less noble. All it takes is one fateful night, where these two collide, opening a door both thought slammed shut and locked forever.
From the past to the present, Christina and Riley show that true love doesn’t always run smoothly, it might not conquer all, and most importantly, love is complicated.
“Lost in Flight” is book two in the “Complicated Love Series.” 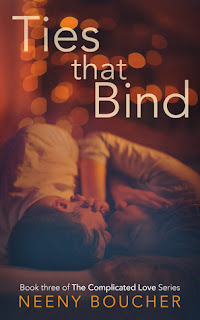 Blurb:
Forced to return to her hated hometown to work, Christina Martin, lawyer and ex resident bad girl, finds herself questioning her life choices. Reunited with her former husband, Nicholas Riley, their tenuous and complicated relationship is tested when secrets from the past and present are revealed.

Riley, a man with explosive secrets and penchant for psychological games, faces the dilemma of keeping the woman he loves through lies by omission or potentially losing her with the truth. This isn’t just their second chance for happiness, it’s their last chance and there may be some things that love can’t conquer at all.

Equal parts helped and hindered by a colorful cast of supporting characters, Ties that Bind, book three in the Complicated Love series, continues the dysfunctional relationship of Riley and Dina. 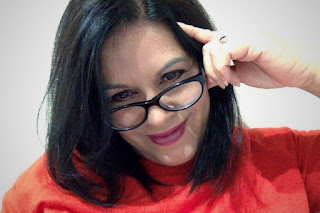 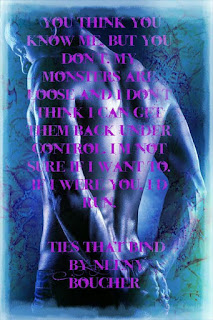 Excerpt from Lost in Flight:
Christina, Shanwick, The Present, 2012

Skin meets skin, trailing promises and desire. Feathery breaths whisper on Christina’s shoulders. Her eyes snap open, squinting at the morning sun. The dull throb in her head gives notice, as does fierce thirst.
Her tongue seeks moisture on her lips, but there’s none. Christina’s stomach roils. Her breath is radioactive. She makes her own self feel sick.
Blue walls, a dresser, and a familiar door: recognition tugs at her consciousness. Christina knows this room, but hasn’t been here in a long, long time. She’s also naked and not alone.
Wrapped around her is her ex-husband, ex-love of her life, and persona non grata, Nicholas Riley. Riley’s fast asleep, breathing heavily, and his hands are wandering up her body. One lands on her boob, clutching, groping.
Christina jerks forward, shrugging him off. She opens and closes her eyes, counting to ten. Nothing changes and he is still here.
The gory details of last night are behind the ominous, pulsating fog in her head. The man, the lack of clothing, and the rumpled bedding indicate what it involved. Adrenaline responds to her internal alarm.
If he wakes… A myriad of awkward scenarios run free-flow through her head. This will be the fastest exit of shame in the history of exits of shame.
Extracting herself finger by finger from Riley’s death grip, Christina slips over the side of the bed. The room sways, rocking back and forth. She lurches forward on wobbly legs.
Christina’s bladder aches. She needs to do things, desperate things… human things. She just can’t do them naked.
Her little blue dress is at the end of the bed. Hunching down, she crawls to retrieve it. A quick search for her other belongings throws up further questions. Draped at an odd angle on the mirror are her panties. It looks like someone slingshot them.
Cringe lands on Christina’s face in big, red, heat spots. What did she do? Scratch that. Willful ignorance is sometimes a kindness.
Her bra, shoes, and handbag are nowhere to be seen. The bras and shoes are manageable, but the handbag is a problem. Her life is in there.
Hauling on her dress, Christina slinks over to her panties, pulling them on with a hop and a bump. She recoils at the woman in the mirror. Smeared mascara accentuates dark brown eyes and then there’s the lipstick. It’s everywhere: face, teeth, chin, and neck.
But, the makeup is nothing in comparison to the hair. Her after-sex hair is an 80’s rock video. Dragging her fingers through it, she winces. Taming it is a lost cause and also, she doesn’t want to anger it.
Years ago, this wouldn’t have bothered her. She was “Dina,” high school Queen of the Outcast Crew, and a true believer in grunge. By today’s standards, Christina Martin, lawyer, she is a complete mess.
Wiping as much of last night’s makeup off as she can, Christina creeps to the door. Riley hasn’t moved, just rolled over onto his back and settled in the space she vacated. Taking a deep breath, she blows it out of her mouth quietly.
I can do this. I can get out of here and if anything comes of it, I can use the old lawyer’s trick of: deny, avoid, defer, and engage. There is also “settlement,” but that is the last resort.
Christina’s hand is on the bedroom door handle. She freezes at the crunching sound it makes. Every nerve ending is on high alert, but the silence from him allows her to relax.
She pulls the door toward her, but it sticks. She pushes and pulls, but it will not budge. Horror sweats break out.
“Good morning.” Riley’s raspy, amused voice hits her senses like an old lover’s caress. Intimate, knowing. It sends chills up her spine. 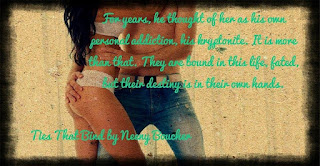