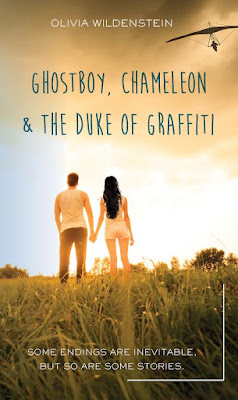 Some endings are inevitable, but so are some stories.

Cora Matthews, the principal’s gloomy goth daughter, is not exactly popular Duke Meyer’s type. Still, Duke finds himself inexplicably drawn to her dark eyes and mysterious manner. She makes it clear she doesn’t return his admiration, but when a burst appendix lands Duke in the hospital, he and Cora will be forced to come together by the most unlikely intermediary: her eight-year-old brother, Jaime.

Duke learns Jaime has brain cancer and little chance of long-term survival. He admires the kid’s plucky positivity and wild imagination and offers to write a story about Jaime’s make-believe superheroes. So begins an epic tale—that of Ghostboy, Chameleon, and the Duke of Graffiti—and a deep friendship between Duke and Jaime.

Despite their outward differences, Cora and Duke bond over their affection for Jaime, but unintended betrayal and Jaime’s advancing disease threaten to derail their blossoming romance before it can truly take root.

Ghostboy, Chameleon & the Duke of Graffiti is a gorgeous debut novel that will resonate with the thoughtful fans of John Green’s blockbuster The Fault in Our Stars. 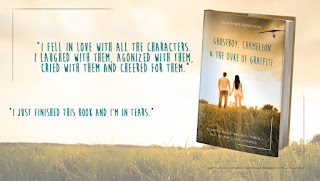 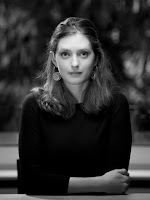 great sense of humor, and a Swedish mother whom she speaks to at least three times a day. She chose Brown University to complete her undergraduate studies and earned a bachelor’s in comparative literature. After designing jewelry for a few years, Wildenstein traded in her tools for a laptop computer and a very comfortable chair. This line of work made more sense, considering her college degree. 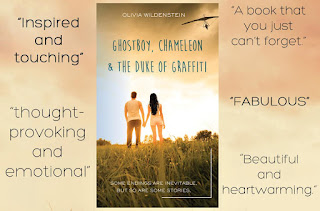 A bright light pressed against my clasped lids. Aliens were drifting down from their spaceship to take me home. I was being abducted.

“Huh?” was the alien’s response. It creased its triangular forehead. “You don’t have to. You can stay right here.”

The alien had a childish voice. Bizarre, considering the number of wrinkles on its purple skin.

“I have no interest in your planet,” I said again.

My eyelids flipped up and I jerked backward from the flashlight shining in my face. The movement awakened the incision on my right side, making the whole area ache.

“Turn that thing off,” I muttered.

The handheld flashlight snapped off, but my bedside lamp switched on, revealing a small and very human boy.

“Okay, maybe I did.” He shifted on his feet. His head was leveled with mine, yet he was standing. “I’m Jaime. You’ve been out for a long time.”

I rolled my eyes toward the ceiling. “It’s called sleeping. That’s what people do at night.”

I was tempted to ignore him, but he seemed too young to be alone in a hospital at night. “Duke. Duke Meyer.”

“No way!” he whispered, seemingly in awe. “I’m sharing my room with the Duke of Graffiti? The guy who spray-painted the woodie on the woodie?”

“Do you even know what a woodie is?”

Maybe he wasn’t as young as I thought he was.

“How did you hear about the…incident?” I asked.

The story must’ve spread from my classmates to the rest of their families, and thus to our entire town.

“I know. Still thought it was cool, though.”

“Glad I made your day then,” I said. “Are you here by yourself?”

“No. You’re here too. You weren’t abducted by aliens.”

I cocked a brow and a jolt of pain radiated through my forehead. “Ouch.”

“I never had appendicitis,” Jaime said, toying with the strings that kept his Batman pajama bottoms up. “Does it hurt?”

“There’s some pain medication on your table. You wannit?” he asked.

I shot out my palm and he dropped two tablets into it. I swallowed them and then chased them with the cup of water he gave me.

“Are you sure they were pain meds?” I asked, suddenly more awake.

“They could have been peanut M&Ms. Did they taste chocolaty?”

He grinned and thick black lashes blinked down over blue eyes that seemed to take up a third of his face. “So where did the aliens want to take you?” he asked, going to sit on his bed. I could see it now that he’d drawn the divider open.

“On their spaceship,” I said.

“I would totally go.”

“You’d go with a bunch of creepy, triangular-headed dudes on a spacecraft destined for God-knows-where? Get out…You would never set foot on that thing. You’d probably run home crying to your mommy.”

“That’s fine.” He shrugged his narrow shoulders. “She died when I was born, so I never knew her.”

“Eight. What happened to your forehead?” he asked.

“I fell against a metal weight rack,” I said.

He giggled and I noticed he was missing two teeth.

“You should make up a cooler story. Like you were cut with a knife while defending a woman and her baby in Montgomery Park.”

“Okay…” I didn’t want to shoot the kid’s idea down, but I wasn’t going to brag about some fabricated feat.

He scrunched his brow in disappointment, and gaped down at his bare feet that swung without touching the floor.

“How about I tell people I was juggling ninja stars, and one slipped and carved out my forehead?”

He looked back up at me. “Cool. But not as cool as my story. How about you got caught by government spies, and they tortured you because they thought you were harboring a Colombian drug lord in your basement?”

“Umm…You have a very active imagination, don’t you?”

He was rolling a piece of the rumpled bed sheet between his thumb and index. “It takes my mind off things.”

I grunted. “What sort of things do you have going on at eight?”

“Just because I’m young doesn’t mean I have no life.”

A long silence set in. Rubber soles squeaked just outside our door. I wondered if someone was coming to check on us, but the footsteps continued and then petered out.

“Why are you in the hospital?” I asked.

“I don’t want to talk about it,” he mumbled.

My gaze darted to the small pile of comics on his nightstand.

“Do you like comic books?” he asked, following my line of sight. His voice had perked up again.

“Do you want to borrow one?”

“Sure. It’s not like I can sleep anymore,” I added under my breath.

He didn’t say he was sorry. Probably because he wasn’t. He slid off his bed and carried over a few books. I selected a Superman, which looked as though it had basked in the sun for a decade.

Jaime peered at the cover. “Lois Lane’s going to activate a de-aging machine and turn herself into a baby, but Clark Kent will give her the antidote. He puts it in a baby bottle to teach her a lesson.”

“I wouldn’t want to watch a thriller with you,” I said.

“It’s all right. I’ll just find something else to read.” I took another book from the pile he’d placed on my tray. It was an equally vintage-looking comic strip. The colored ink had turned sepia, like the family photographs on my grandmother’s nightstand.

“I think that’s the one where Archie marries Veronica,” he said.

“Show me the last page?” he asked.

I flipped to the last page and held it out so only he could see it.

I sighed. “I guess I won’t be reading that one either.”

“Just because you know the ending doesn’t mean you shouldn’t read it,” he said as the door of our bedroom flew open.

“Well, slap my head and call me silly! You boys havin’ a party without me?” Hummer-nurse winked at Jaime but shooed him off my mattress. “It’s the middle of the night, hun. Off to sleep or I’ll get in trouble with your daddy.”

“Okay,” he grumbled. She tucked him underneath the covers and then replaced my empty IV bag with a fresh one. “What time did you take those pills I left ya?”

“About ten minutes ago.”

She checked my blood pressure and bandages and then clicked off my nightlight. “You’ll be outta here before the day’s out. Healthy as an ox. You need anythin’ else?”

“I wouldn’t mind another glass of water,” I said.

“I’ll be back before you can spell Yolanda,” she said.

“Anythin’ for you, sweet pea.” She stood still for a second, staring at him.

When she left, Jaime whispered, “Yolanda’ll give you some candy if you get on her good side.”

I squelched my first thought, which was, how do you know that? Obviously, he’d spent a lot of time in this hospital. Even though I was curious, I didn’t try to coax it out of him. Maybe Yolanda would tell me. “How do you get on her good side?”

“Talk to her about her cats,” he whispered. “She loves cats.”

Just as he said that, she trundled back into the room and put a glass of water on both our trays. “Nighty night, boys,” she said, before leaving and closing our door.

“Could you tell me a story?” he asked.

I chewed on my lip, trying to come up with something that would entertain an eight-year-old. I decided on the alien abduction tale, but this time they were taking Jaime back to their planet, which was salmon colored because fire raged underneath the white rocks, and the air was devoid of gravity, so you could fly around. As I wove a more complex plot about kidnapping specific humans to bring new skill sets to their planet, I realized that I wouldn’t have minded being abducted by aliens after all.