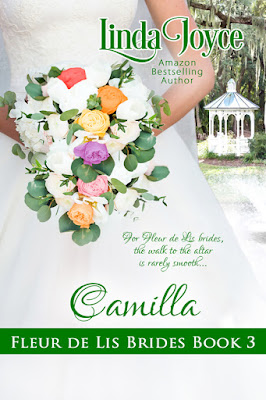 Blurb:
Reformed party-girl Camilla Lind accepts Jared Richardson’s ring, but she won’t be pressured into setting a wedding date at Fleur de Lis. When Steven Sterling, the bane of her old life, shows up to convince her of his undying love, he’s using blackmail to get her back. Camilla fears Jared will believe Steven’s lies because of her shameful past.

Jared has no time to return to his family ranch in Wyoming. Historical restoration contractors are in demand after the devastating hurricane, and work takes him away from Camilla for longer stretches of time. He’s worried—an anonymous someone is sending her flowers. When Steven threatens Jared, he fights back. But he won’t marry Camilla if the only reason she sets a date is to avoid Steven.

Together they learn their love is as steadfast as the Wyoming sky is blue, and Mardi Gras is the perfect time for a wedding.

Once the groceries were stored in their rightful places, Camilla handed him napkins and silverware. “Will you put them on the table? Then grab the salads from the fridge.”

As instructed, he moved to the dining room. “Nice flowers on the table. Who sent them?”
Jared called out.

“Let’s share a bottle of red wine tonight,” she hollered from the kitchen. “Pick your favorite from the rack. And you know where to find the glasses.”

Obviously, she hadn’t heard him.

“Wine is open,” he called out a few minutes later.

When she appeared in the doorway to the dining room, he poured dark liquid into both glasses and offered her one. They clinked their glasses together.

Taking the glass from her, he deposited it on the table. “About these flowers,” he said.

“Are you fishing for a compliment? You know who sent them.”

“Know?” Jared asked. She wanted to play a guessing game?

“Okay, I understand.” She stopped and made a slight bow. “Thank you, darlin’, for the flowers. I should’ve said that the minute I saw you, but you…sort of distracted me. They’re lovely, and I adore you.” After blowing a kiss in his direction, she went to the stove where she placed sliced bread on a plate with a small dish of butter. “Take this, please. I’ll ladle up the gumbo.”

“Honey, I love you bunches, but I didn’t send the flowers. I bought you a gift, but it’s still in my truck.”