#ExcerptReveal - Where I End by @michelle_dare 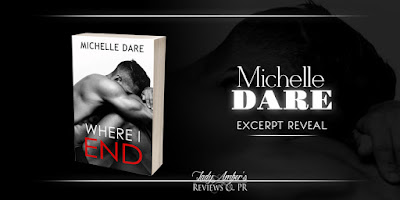 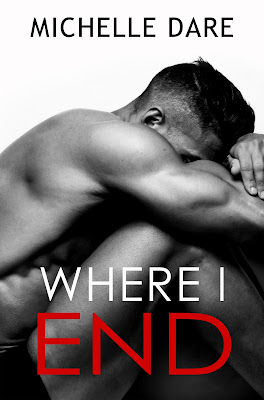 Blurb:
Eve
Pretentious. Arrogant. Condescending. Cruel.
All words I'd used to label him. Exactly what I’d always believed he was. All that changed one spring morning when I realized I didn't know the man behind the facade at all.

Angry. Desperate. Broken. Mine.
All words I'd use to define him after I interfered. Once our eyes locked, I was all in. There was no turning back. He tried to push me away, but I refused to let him go. I was determined to save him. What I didn't expect was that he would save me, too.

Cy
I was so close to ending my misery. Mere seconds away. Then she stumbled upon our argument, and I changed my plans. She wasn't supposed to be there. She knew too much. Even with my entire world burning down around me, she wouldn't walk away.

I’ve always been on my own. No one had ever fought for me before. Why should anyone start now? But she did, no matter how much I tried to stop her. I knew I was nothing, unworthy of her, but she was persistent. Once she got under my skin, I couldn't let her go, because where I end, she begins.

Pulling up to the cabin, I shut my truck off and go inside. Parker is in the kitchen making himself lunch.


"Sandwich?" he asks, holding one up.


"Sure." I've only eaten half a danish in the last eighteen hours. I need food.


"Look at you all happy. You must have found some hot woman last night and had a hell of a time." He hands me the sandwich and starts to make another one.


I take a few bites to appease my stomach. "Hot woman, yes, and last night sucked, but this morning was great."


"Something happened last night, and it fucked me up big time, so I left. I had to get out of here, and didn't know where I was going until I ended up there."


"Eve's." It's not a question. He knows I would go to her. There’s nowhere else. No one I’d trust outside of Parker and her.


I nod. "When I got there, she wasn't home, but I couldn't bring myself to leave. After about an hour of me sitting on the stairs in front of her door, I heard her. She wasn't alone. Her date was walking with her to her door."


He raises his eyebrows. "Her date? I didn't know she was dating anyone." Parker and Evie have been talking a lot. They've become close.


"No! Finn Fucking Bradley. I haven't seen him in months."


"Me, neither." I take another bite of the sandwich and find a glass to get some water. "Anyway, Evie trips as she's walking up the stairs and I catch her. She must have seen something on my face, because next thing I know, I'm in her apartment with the door shut while she gets rid of Finn."


"C'mon, Cy. There is no competing with you. Not in Eve's eyes. It's you she wants. She’s always asking me about you, wanting to make sure you are doing okay." He never told me that.


"No, I did that on purpose. You didn't need her in your head more than she already was. After what happened that night when I was having dinner with her, and you showed up, I didn't like seeing you upset. You needed to get your head on straight after seeing her. Me talking about her all the time wouldn't have helped you.”


He smiles wide. “Look at how far you've come in six weeks. You're with Eve, for fuck's sake."


"How far I've come? I'm still a fucking mess. I could be making a huge mistake by being with her, but I can't stay away anymore. If last night taught me anything, it's that I need her. I'm done pushing her away. She knows I'm fucked up, and she still wants me. I have no fucking clue why."


"Because she cares about you, douchebag. She sees something special in you, and no matter how many times she tried to get you out of her head, she couldn't. Same with you."


"Then why the hell did she go out with Finn?"


"Six weeks, Cy. You couldn't expect her to sit around forever. She is smoking hot, even if she doesn't realize it. Someone was bound to ask her out." I give him a hard look. He holds up his hands. "I have zero interest in her, outside of being her friend. Chill, dude."


"I know." I rake my hand through my hair. "I'm sorry. I get fucking crazy where she's concerned."


"Fuck you." I throw the last bit of my sandwich across the kitchen at him.


"Okay, go back to your story. We drifted off course."


"Right, so I crashed in her bed, but nothing happened. Well, we talked, we slept, and I had a nightmare, but she was in it this time." Parker is the only other person to know of my nightmares, outside of my doctors. I normally wouldn't have told him, but he's had the unfortunate task of waking me on multiple occasions, now that I live with him.


"Yeah, so she woke me up, and then we left. We took my truck out to the falls and sat there to talk. One thing led to another and..."


"You fucked her in the river?"


"What? No! We talked, and I’m now in a committed relationship with her."


"Get the fuck out! You have a girlfriend?" I nod. "Holy hell, I never thought I’d see the day." He walks out to the deck, leaving the door open behind him. He cups his hands around his mouth and yells, "Look out world! Cy Revere has a girlfriend! Hell has officially begun to freeze over!"


"Would you get back in here, asshole?"


He comes inside, kicking the door shut behind him. Parker's hand claps me on the shoulder. "I'm happy for you. Truly. It's time you've had some good in your life. I'm just glad it's Eve." 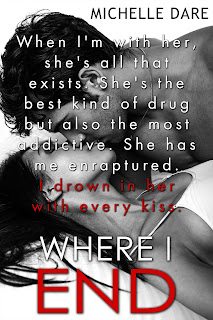