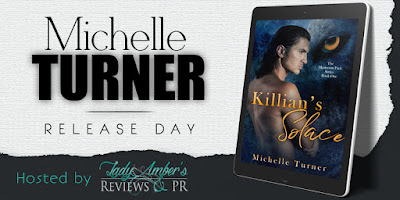 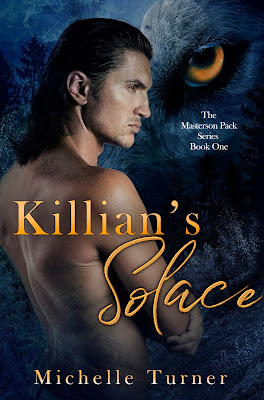 Blurb:
When you’re a shifter you know two things for certain. One, you’ll change into a wolf. And two, you’ll find your true mate. Though he knows these things, Killian O’Brian has given up hope on the second thing happening for him. So, when his niece predicts his time has come he’s in complete disbelief.

Reeve Quinn has always had to hide her true self. So, when she gets offered a position in a small town run by wolf-shifters she thinks she’s found the perfect chance to stop hiding and just be her. Little does she know she’ll find a whole lot more than acceptance.

Can Killian handle Reeve’s true self?

Can Reeve handle being mated to a wolf?

Or will they both be consumed by the ominous threat looming over the pack?

Michelle is a native Ohioan. She lives with her boyfriend, son, and eight spoiled rotten animals. When she isn't spending time with her family you can find her with her nose stuck in a book or her head in the clouds as she dreams up new adventures for her characters.

The man slowly turns his head, and bright emerald eyes lock with my own slate blue ones. I swallow hard before jerking my eyes away from his to focus on the patient. “What happened?”

The little boy on the exam table looks between the man and me. His brow is furrowed in confusion. When he realizes the man isn’t answering he takes it upon himself to do so. “I jumped off the swing.”

“A daredevil I see.” I force a smile on my face even though the man is still blocking my way. Reminding myself time is of the utmost importance I ask. “Umm, do you mind moving, so I can check out his arm?”

Before he can respond I hear the front door bell ding, muffled voices, and the sound of more foot fall heading my way. I twist my head to look behind me only to find the largest man I’ve ever seen.  He has to duck his head to walk into the room, he’s so tall. Somehow, I work up the courage to ask. “Can I help you?”

Around the giant man a small attractive brunette woman pushes through and answers for him. “That’s our son.”

“Then who is this?” I ask pointing at the man still on his knees.

“My brother.” The giant answers, and then as if taking in the strange scene for the first time asks. “What in the world are you doing on the ground?”

Oddly, instead of responding to his brother, still staring at me, the man on his knees says. “You smell like peppermint cocoa.”

“About time.” The giant chuckles.

I ignore them both and ask. “What?”

The man slowly picks himself up off the floor, moves closer to me (not that we aren’t all already cramped in this small room), and states. “You smell like a Christmas drink.”

“Did you fall and hit your head?” I elaborate my earlier question.

The woman and giant break out into hysterical laughter this time. What is wrong with these people?

“Have you been drinking?” I ask, keeping with my line of questions. The parents of the boy start to laugh harder. I continue to ignore them.

“Are you asking if I’m drunk?” The man questions me back.

“Alcohol has no impact on shifters.” I hear Megan holler from outside the room, having clearly been listening in to this train wreck.

“Really.” He responds, obviously getting agitated.

“Can they be diabetic?” I ask my next question.

“What the hell are you getting at?” The man asks, his bright green eyes flashing with agitation.

“You’re not making any sense, so I’m trying to assess the situation to make sure there’s nothing medically wrong with you.” I explain what I believe is obvious. Instead of responding the man starts emanating a low growl.

I turn my head to ask the giant. “Is this normal behavior from your brother?”

Wiping the tears of laughter from his eyes, he responds, “Absolutely not.”

“Okay. Should I be concerned that he’s growling like that?” I have no experience around shifters, other than Doc, and not once in the all the years I’ve known him has he ever growled at me.

“He’s not going to harm you.” The giant answers, giving me some relief.

“He might bite her.” The woman gives as a contradicting answer.