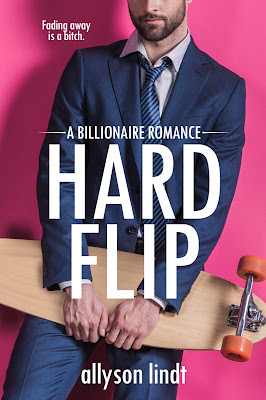 Fading away is a bitch.

Fifteen years ago that meant he was king of the tail slide and had his choice of tail. Now his past makes it PR-suicide to put his name on his commercial real estate business. He’s working to make his firm reputable, when some unknown crashes his website to extort Mischa into giving them a job.

He’s ready to tear the arrogant jerk a new one, until he meets her.

Ash is sexy, reckless, and living paycheck-to-paycheck to support herself and her younger sister. Mischa tells Ash she can have the position if she proves herself. In the meantime, if she poses as his new bride, she gets stability and financial security. He gets a ready-made family, complete with the aww factor, to make him look respectable.
It’s the perfect proposal.

As long as no one finds out the marriage is for show. And Ash’s past doesn’t come back to haunt them. And she and Mischa remember those white-hot sparks that fly between them, every time they touch, are just for show…

Rain hammered the windows. They stepped outside, and wind tore Ash’s hair, blowing it in her face, and across his chest.

“If you wait here, I’ll grab my car and be right back,” Mischa offered.

She pulled long, blonde strands back into her fist, and studied him. “Why?”

“Why would I wait here?” She stepped into the rain. Within seconds, her clothing was drenched and clinging to every inch of her. Hugging her hips. Her shirt accentuating full breasts and perky nipples.

He dragged his gaze back to her face, to see a tiny smile playing on her lips. He wouldn’t grasp the opportunity to tease her about getting wet. He was classier than that. Okay, he wasn’t usually, but she deserved better. Still, he couldn’t help look her over again. It wasn’t simply that her soaked outfit left little to the imagination, it was that she didn’t seem to mind any of it.

“Enough with the staring.” She grabbed his hand and tugged him into the rain. “It’s water. It won’t kill you.” She turned her face toward the sky, and a laugh escaped. She looked back at him with an impish smirk. “See? We’re not dead yet.”

“Gods, you’re gorgeous.” That wasn’t what he meant to say, but it was the only thing he could make sense of in his head.

She flushed, and he rested a hand on the back of her neck. He traced his thumb across her cheek, smearing a cluster of raindrops. He tilted his head and brushed his lips over hers.

It was supposed to be a light kiss. Playful. Teasing. But her gasp sang along his senses, and the taste of coffee and rain drew him in. He crushed his mouth to hers, devouring her sighs.

She pressed closer, and tangled her fingers in the short hair at the base of his neck, holding tight. Cool, wet fabric heated in an instant between them, and he fought the urge to shove their clothes aside. To get closer and feel more.

He dropped a hand to her hip, to slide under her shirt, but didn’t push higher. Her tongue danced with his, in a frantic rhythm.

It didn’t matter that the weather raged around them, tearing at her hair, whipping sharp stings of water against his skin. He could fall into this moment. And it was just a fucking kiss.

When she shifted her weight, she pressed against his semi-hard cock, and it stiffened in an instant. Straining against his jeans. Begging for a taste of its own.

He needed to stop this, at least temporarily, or he’d strip her down in the middle of the sidewalk, press her against the brick, and fuck her.

He summoned the last of his restraint and broke away. She studied him with a playful, almost challenging smirk. He rested his forehead against hers, still struggling to catch his breath. “My place or yours?”

She shook her head, not breaking the contact between them. “I can’t. I’m sorry.” She dropped her hands from his hair, and interlocked her fingers at the base of his neck instead. “I need to be at home in the morning, when Kelly gets back, and I don’t invite anyone back to the apartment, for the same reason.”

He was prepared for the brush-off, and her reasons made sense. But the way she stayed pressed against him, the contrast of hot between them and cold running down his back, jarred the logic-center of his brain. “I’ll see you back to your car, then.”’

“Then I’ll give you a lift home? Or walk you there. We’re already wet.” He pulled back enough to look her in the eye, trying to get a read on her.

She stepped out of his grip, and disappointment flooded in with the chill that rushed to his skin. “I’ll be fine,” she said, her voice kind. “I appreciate the offer, but I won’t think any less of you if we part ways right now.”

“Did I read something wrong about this—about us?” He pointed between them. Her body language and voice made him think this wasn’t over, but her words might as well be fuck off.

She chewed her bottom lip, and the sight drove straight to his cock. “You didn’t, it’s just that…” She pulled her phone from her purse, half covering it from the storm. “Give me your number, and I’ll text you mine.”

If she wanted to be passive-aggressive with the brush-off, that was fine. He hated to write the night off, he’d enjoyed her company, but he wouldn’t push if she wasn’t into it. He gave her his number. “I can’t walk away in the middle of the dark and rain, without making sure you reach your destination safely.”

“I’m fine.” The sweetness faded from her tone. “I had a wonderful evening. I’ll call you. Until then, I need to get home.”

“I got it.” He jammed his hands in his pockets and stepped back. “Good luck with whatever’s got you busy tonight.”

She gave him a tight smile and turned away. He watched her leave, and chase her down, be a gentleman repeated in his head. She’d made it clear the night was over.

He forced himself to turn and head back to his car, unsure what to make of the entire encounter.

Allyson Lindt is a full-time geek and a fuller-time contemporary romance author. She likes her stories with sweet geekiness and heavy spice, because cubicle dwellers need love too. She loves a sexy happily-ever-after and helping deserving cubicle dwellers find their futures together.