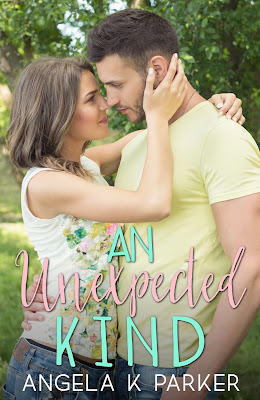 I used to think that love was for the weak.
It was not something that would ever tie me down.
Until I learned the truth behind my resistance.
When I let down my guard, I wasn’t expecting to find love.
Samantha’s voice called for my attention before I ever met her.
Now my heart is in need. My heart wants her.
And I will do whatever it takes to make it happen.

All I ever wanted was to be loved.
Until love crushed my heart into a million pieces.
I built a wall tough enough that no one could ever get that close again.
But Bradley isn’t just anyone. I’m not prepared for all that he is.
He’s searching for something that I don’t think I can give.
The more I try to deny him the harder it becomes.
He’s going to tear my wall down. And I’m torn because…
I wasn’t looking for love.
Love found me. 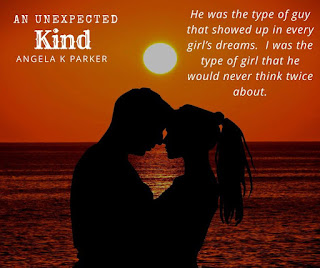 Angela K. Parker is a country girl with a big heart.  She grew up in Greeleyville, SC where she graduated from C.E. Murray High School.  She received her Bachelor's degree in Business Administration/Finance from Limestone College in Gaffney, SC.  Her passions include reading, writing, music and she loves spending time with her family.  When she’s not engaged in any of the above, she’s knitting or catching up on the latest movies.  She’s always had a very active imagination.  Now she’s putting it to good use. 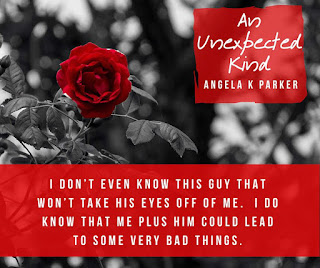 I had a plan for my life; a well thought out plan that didn’t include love until I reached the age of twenty-nine.  According to my timeline, after I finished high school, it would take me eight years to get through undergrad and grad school.  I would use the last year to get established and prepare for whatever comes after.
All of my life, I’ve wanted to be a mathematician.  Something about numbers had always excited me.  Most of my peers are surprised to learn that about me but they respect me for who I am.
I had plenty of friends, went to parties and did normal things kids my age did.  I had also spent a great amount of time with my face shoved between the pages of books.  I didn’t have a bad life, but I had watched my parents struggle to get where they are.  I wanted to do better, be better and they wanted that for me too.
My parents, Clifford and Laura, are not the perfect couple.  I had witnessed countless arguments and disagreements throughout the years.  One memory stands out like a sore thumb; a memory that changed my way of thinking and influenced the course of my life.  I was young, but I still remember it like it was yesterday.
I was fourteen at that time.  My mom was a cashier at a local grocery store.  At the time mom’s car was in the shop for repairs.  Dad was the driver for all of us.  Dad and I had gone to pick her up from work that evening.  When we got there, mom was standing outside talking to some man.  The man’s hand was gently placed on her shoulder and he looked at her with such admiration.  Her smile was bright and she looked genuinely happy.
At home mom was always busy.  She rarely took a moment for herself and her smiles weren’t plenty.  That day when we picked her up from work, my heart was full.  It had been a while since I’d seen that smile.  It wasn’t until years later, when I saw that smile again.
When we got home that evening, mom and dad barely spoke.  I could sense that something was off.  My dad was a casual drinker but that night at dinner he drank too much.
Mom had put us kids to bed, but I was curious.  I couldn’t sleep, especially when I heard the raised voices.  I don’t know what they were arguing about, but I recognized the words spoken that shouldn’t have been said.
I heard the front door slam shut when my dad stormed out.
I witnessed the tears that my mom shed as I exited my room to comfort her.
My dad was not a drunk, but that night he drank too much.
He left that night and stayed away for weeks.  My mom was a wreck and I didn’t understand how my dad could hurt her like that.  My child mind hated him for it.  I wasn’t supposed to be the one to make her happy, but I tried.  I shouldn’t have had to pick up his slack because he left, but I did.
When he came back weeks later, they acted as if none of it ever happened.  That simple act made me pull away from my dad, as well as my mom.  I was angry with him for leaving and thinking he could just come back without an explanation.  I couldn’t understand how she could let him back in after all of the pain he had caused.  How could she forgive so easily?
I vowed that day to never be like my parents.
Drinking caused pain.  Alcohol would never touch my lips.
Love hurts and makes you do stupid things.  My heart would never fully belong to another person.
My parents were weak and I wouldn’t make the same mistake.  When I was ready to love, it would be on my terms and half of my heart would always belong to me; because surrendering to love is weakness.