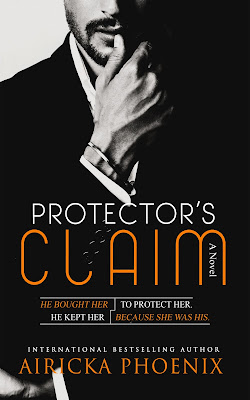 I made a mistake.
I allowed myself to be born. I allowed myself access into a life that wasn’t mine, and for that, I had willingly submitted my body and soul to a man whose sadistic pleasures knew no bound, a man who relished in my pain as much as he craved my flesh.

A monster I would do anything to escape.

But what if I could make it stop? What if the cost of freedom was a single night in a stranger’s arms? What if one final sin was all I needed to commit to find peace?

I had always known of the sickness that lived inside my father, the demons who controlled the man. His death was a blessing to every innocent he’d destroyed with his dark hunger.

Yet, despite his demise becoming my curse, a shackle trapping me in his twisted secrets, it lured me to it, too. It promised me the thing I coveted above all else. It seduced me deeper into the world I wish I knew nothing of, but there was no turning back, not even if by accepting, by taking what didn’t belong to me made me a monster like him.

Gabby would finally be mine.

I don't even know where to start with this review, except to say that no matter what Airicka Phoenix writes, it's always freaking epic. I love her Dark Romance books, although I have to wonder about her dark, twisted mind at times and where she comes up with this stuff. However, then Id have to wonder why I love it so much. I really hated the father in this story, there is a nice place in hell for people like him. Once I started Protector's Claim, I couldn't get enough of it. I needed more, each page brought drama, more suspense. I really didn't see the twist coming at the end, the author completely caught me off guard on that one. I loved the connection between the main characters, and I loved how the male lead was so protective and would do anything to protect what was his. 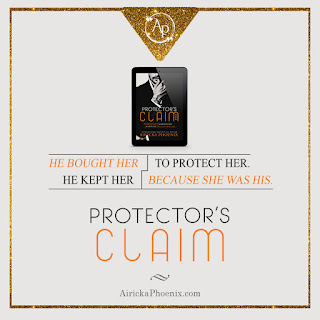 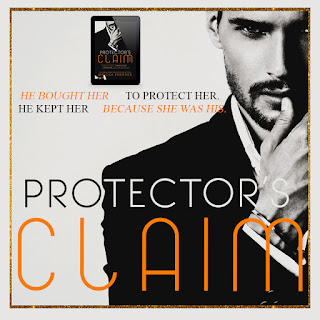 “You live here alone?” I asked as he left me at the wide, U-shaped island dominating the majority of the main area to wander over to the fridge.
He nodded. “For the last three years.”
“Where’s your mom?”
He yanked the doors open, releasing a puddle of yellow light across the floor. “She has her own flat downtown. Likes it better there. Closer to the shops.”
It seemed like such a waste, all that space. I couldn’t picture me there at all with all those looming, empty rooms and winding corridors. I wouldn’t know what to do with myself. My apartment wasn’t much to brag about. Even with its smallness, I still felt the pang of loneliness. I couldn’t imagine being here in the cold and dust, surrounded by things that would offer no comfort.
“You don’t like it.”
He was watching me when I blinked out of my reverie.
“It’s not that I don’t like it,” I clarified carefully. “It’s just so…”
“Ostentatious?” He brought out a platter of fruit and placed it on the wraparound counter. “Overdone? An eyesore?”
“Lonely,” I whispered. “I don’t know how I feel about you being here by yourself all the time. I’d lose my mind.”
“That’s the thing, love.” He rounded to my side. “I’ve been alone my entire life. You get used to it.”
“I still don’t like it.”
His hands found my waist and I was pulled to him. Warm palms glided up to my shoulder blades. The heat of them radiated through the thin fabric of my top.
“Then don’t leave me here alone.”
My breath caught. My heart tripped in my chest. It quickened with the light bump of his nose against mine.
“You don’t make sense,” I murmured, fingers lifting to curl around his bare shoulders. “Everything you keep talking about, marriage and moving in together after only one night … men usually avoid those things, don’t they?”
His nose, his lips grazed mine with every slow rock of his head. “I don’t know about other men, but I’ve been waiting three years for you, Gabby. I’ve done my time. I’ve accepted that there’s no winning whatever pull you have on me. The want I had for you in the beginning is now a need I won’t deny myself. I need you. If not here, then I’ll find us a new place, anywhere you want. Whatever you want, it’s yours, just … let me keep you.”
I kissed him.
Fuck common sense.