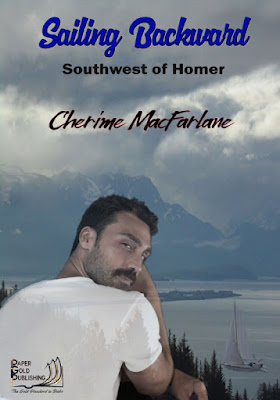 Blurb:
Olivia has had enough of paradise. The Bay Babe is hers, bequeathed by her father. The young woman sneaks out of the Hawaiian harbor bound for Alaska. It’s a long trip single-handed for a lone woman, but an urge for home on Kachemak Bay drives her.

Adrift in a lifeboat on the Gulf of Alaska, Don wonders if he’ll live to see morning. Every rotten thing he’s ever done haunts him as he bails. The white sails of an approaching yacht might mean survival if he can get their attention.

I came to Alaska kicking and screaming in 1976, and I never want to leave. I cut firewood on shares for money to get through the winter. I swore I would not live above the Alaska Range because it was too cold there and wound up in the Copper River Basin where it got just a cold as Fairbanks.

My second husband, a Scot from Glasgow, was the love of my life. When I write Scots dialect, I experienced hearing it from my in-laws. Each time my husband got on the phone to Scotland after five seconds, I could hardly understand a word. I was my second husband's chief mechanic's helper and roadie.

I live in a cabin which is slowly being surrounded by the city and wish I were farther out. My cat and Husky-Collie mix dog are happy in our little slice of heaven called Alaska. In the silence of winter dreams of people and places provide a rich pool of ideas to explore.

As a reporter for the Copper Valley Views, Cherime MacFarlane received a letter of commendation from the Copper River Native Association for fair and balanced reporting. He led her to the crew quarters and Ole sighed. “I get it. The bunks are one atop the other and there are only two. Why is this area so small?”

Don tapped her on the shoulder. “Over here and you’ll understand. The man who owned Sandy before me had her built to his specifications. He and his wife never had kids and she fished with him all the time.”

He opened the door behind them and Ole stepped inside the captain’s quarters. “Liked her comfort, did she? I’ve never seen a working vessel this size with two heads. And you can actually walk around the bed on both sides. Living in the lap of luxury, that’s what this is.”

He shrugged his shoulders and sat on the edge of the built-in bed. “The perks of ownership, what can I say?”

With a laugh, she flopped down on the side of the bed next to him and fell backward with both arms out. “This is comfortable. You’d better be careful; the crew might mutiny one of these days.”

He turned his head to look at her and the smile left Ole’s face. Something about the man’s expression, maybe the glint in his eyes, pinned her to the mattress. As if a switch got flipped, it all changed between them.

“Ole?” Don turned on his side and leaned back on one elbow. The fingers of his free hand pushed the hair away from her forehead. He traced her eyebrows then slid a fingertip down the bridge of her nose to her lips.

Her breath hitched when his thumb slid across her bottom lip. One of her hands cupped his cheek. Don bent his head and kissed her. Everything before Don fell away. The guys who fooled around and tried to cozy up to her for the Babe were far short of Don’s league.

She might have given in if he pushed it, but he didn’t. Ole wasn’t sure how much time passed before he sat up, stood, and held out a hand to her. “Upsy-daisy, sweetheart. You need to get your delish self and the Babe home.”

With a sigh, he tugged her into an embrace. His cheek rested on her hair. “That was out of line. I probably shouldn’t have. I’m too old and got too much baggage to be messing with a sweet thing like you.”

She slapped him lightly on the chest. “Don’t be a Dick, Don.”

He groaned and Ole laughed as she leaned back in his arms. “I don’t want to hear another word. There’s no reason to ruin a perfectly good kissing session with bullshit.”