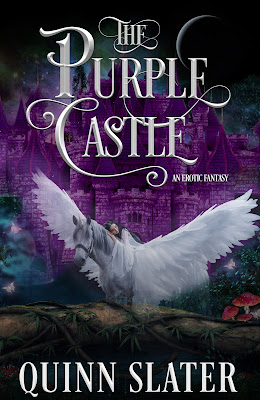 Blurb:
The Purple Castle: A Twisted Retelling of Snow White

Escaping the tumultuous life with her abusive husband, Zareena vanishes into the dark of night where she finds an enchanted land of mystical and magical creatures in the woods behind her home.But as magical as the land seems, a darkness lies in wait—a witch who desires to sit on the same throne Zareena has been destined to occupy. In her quest to the throne and to wash away the curse the witch has cast upon both Legendary and its king, Zareena must also face her own demons of desire and conquest. The question for Zareena quickly becomes one of strength. Can she accept her passionate awakening while also freeing Legendary from its 1,000-year curse?

Quinn Slater explores the world of yearning and fantasy in a retelling of a classical fairy tale that explores one woman’s search for herself.

Quinn’s work features strong male and female protagonists and antagonist, all of who have just the right amount of sexy with a healthy dose of naughtiness. He was once asked why he turned to erotica. The answer was simple. He wanted to put characters in compromising situations and see how their carnal appetites helped them find a way to a pleasurable ending.

“The dryads are here to serve you on your quest,” Helena said. The nymph flapped her wings excitedly.
Zareena looked up from her foot. “My quest?”
Helena waved her hand toward the path the group followed, and the trees gracefully bent away from the path, revealing magnificent mountains far to the north, and upon the most distant mountain sat a large purple castle. “It is the place you seek. We will help to find what you seek.”
Zareena shook her head. “I don’t understand. All that I seek is happiness. To be loved and cherished.”
The dryads continued moving Zareena’s feet forward, stopping in an open area heavily surrounded by trees. A small building sat in the middle, a gentle fire blazing inside, the silhouette of flames licking the walls. The cottage looked like a place she could live forever.
“He that you seek lives in the purple castle.”
“He?” Zareena questioned. She again scanned the small village, mesmerized by the fantastical plants and tiny creatures.
“Arcturus, ruler of all that you see. He is our king. The lover of us all. And in return, we love him.” Helena motioned at a stump near the small building. “Please have a seat, and we will explain.”
Zareena crossed the open area and took a seat, facing Helena. Although she crossed her legs, she felt no shame for her nakedness. Several of the female dryads fluttered upward, surrounding her head. Zareena looked to the left and then the right. “What are they doing?”
“Preparing you,” Helena replied softly.
The female dryads fluttered around her hair, gently grabbing the long strands.
Zareena watched from the corners of her eyes as the small creatures began to meticulously braid her brunette lox. “Preparing me for what?”
Helena pointed toward the purple castle again. “For our king, of course. He will love you better than anyone. He will treat you as he has treated us.”
“I…” Zareena began but then held her words. A castle? A king? She looked toward the castle again and this time smiled. When she turned to Helena, she saw her own face in a mirror, Helena fluttering behind the mirror, struggling to hold it in the air. She took the mirror and turned her head, marveling at the braids the dryads had fixed into a bun. For the first time in years she felt pretty. No, she felt beautiful. She lowered the mirror, studying her neck, and then breasts, stomach, the patch of hair between her legs, her milky-white thighs and then the rest of her legs. Her body had changed since entering the woods. With the purple castle looking down on her from afar, she felt as if she’d walked into her own fairy tale.
Zareena stood and walked around the dryads’ home, admiring the flowers that seemed to turn and watch her as she passed by. The ground beneath her feet seemed to breathe life into her body. Everything about the dryads exuded an unstoppable energy.
Zareena stopped. Her eyes grew wide. All around her, the male dryads were mounting a female dryad. Small bodies gyrated and glowed. Hips thrusted and wings fluttered.
She moved to her knees and studied two dryads in the throes of love making. The male dryad had the female on her stomach, the female pushing her small ass back toward the male’s driving hips. The male’s body glowed brightly, and the female’s wings fluttered. Zareena glanced to the right, where a female Dryad was perched atop a male, her wings helping her control the male beneath her.
Zareena sat on the ground and crossed her legs before scooting closer to the first couple she had been admiring. Helena floated closer and took a seat on Zareena’s bare shoulder.
“Watch his body,” Helena whispered.
With her eyes still trained on the dryads, Zareena nodded and leaned closer. “He’s becoming transparent. What’s happening to him?”
“Watch closer,” Helena replied. “Watch the female.”
The dryads’ bodies were not much different than those of humans. Zareena watched, amazed, as the female’s wings stretched back and engulfed the male behind her. Though the wings became transparent, much like the male dryad, Zareena could still see the milky liquid surging from the male’s body, emptying into the female. And as the fluorescent cream filled the dryad, she began to sing. In fact, every female around Zareena sang an angelic song as their male counterparts released into them.
“But what about you?” Zareena asked.
Helena smiled and fluttered into the air. “Hold out your hand.”
Zareena did as the small nymph requested. Her heart beat faster and her breathing hastened.
Helena landed softly onto Zareena’s hand and let her wings relax away from her sides. She pursed her lips and sang as beautiful as anything nature had ever created.