#NewRelease - Claimed by Her Jaguar by @SedonaVenez 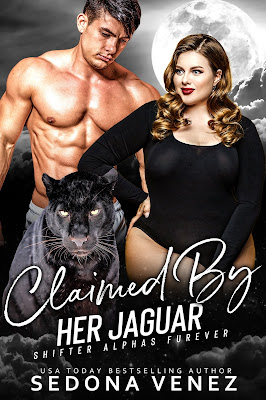 Blurb:
A human desperate for a cure. An alpha jaguar searching for a mate. An agreement that leads to so much more…

Addison James will do anything to save her sister's life, even trek halfway across the world into a dangerous jungle to search for an orchid with the power to cure.

The flower she so desperately seeks has been plucked to near extinction, and dangerous creatures lurk in the shadows, waiting to attack.

Griffin’s jaguar pack is barely surviving. The alpha knows he has to do something to save his people, or they’ll disappear altogether. The humans invading his territory are a threat, but the female could also be the solution to his problem.

When Addison begs for his help finding the orchid, he requires something in exchange, something that crosses boundaries and forces Addison to question how far she’s willing to go.

Will she surrender to the sexy cat-shifter’s demands or will she fight her desires and search for another way to save her sister?

Publisher’s Note: Claimed By Her Jaguar is a stand-alone book in the Shifter Alphas Furever series. HEA guaranteed, no cheating. This book contains a huge, growly, dominant...and completely manly jaguar shifter that loves to protect and dominate his female. If such material offends you, do not buy this book.

NB - This title was originally published as 'On The Prowl' and has been revised and extended.