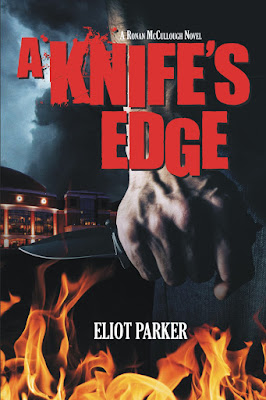 Blurb:
Will her secrets put his life in danger?

Six months after a drug cartel infiltrated Charleston, Police Agent Ronan McCullough continues to fight the drug war that plagues the city. His investigations are halted when the body of a mutual acquaintance, Sarah Gilmore, is found in the trunk of a burning car.

In an investigation that takes him deep into the professional and personal life of the victim, McCullough discovers secrets lurking in her past, and a tangled web of personal and professional conflicts, suspicion, and betrayal.

Sarah’s life is connected to BTech, a new blood diagnostics company that has established a headquarters in Charleston, promising to revolutionize the way diseases are diagnosed and treated and aid the police in criminal investigations. Sarah’s work reveals details about BTech that the company doesn’t want anyone else to know.

Was Sarah killed for those reasons or something larger? As Ronan seeks answers, his life and the lives of those closest to him are used as pawns in a deadly game that has no ending. 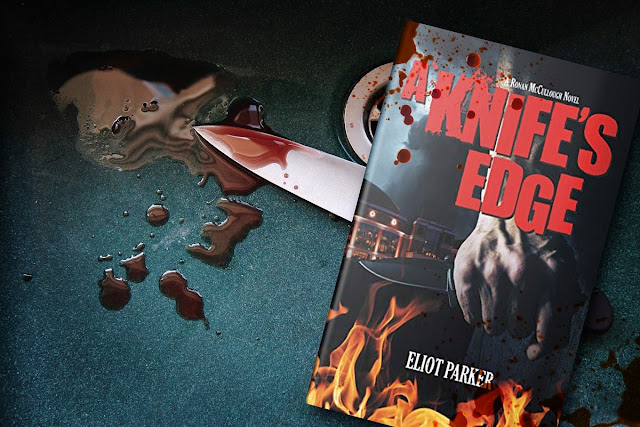 Eliot Parker is the author of four novels, most recently A Knife’s Edge, which was an Honorable Mention in Thriller Writing at the London Book Festival, and is the sequel to the award-winning novel Fragile Brilliance. His novel Code for Murder was named a 2018 Finalist for Genre Fiction by American Book Fest. He is a recipient of the West Virginia Literary Merit Award and Fragile Brilliance was a finalist for the Southern Book Prize in Thriller Writing. He recently received with the Thriller Writing Award by the National Association of Book Editors (NABE) for his novels. Eliot is the host of the podcast program Now, Appalachia, which profiles authors and publishers living and writing in the Appalachian region and is heard on the Authors on the Air Global Radio Network and Blog Talk Radio. A graduate of the Bluegrass Writers Studio at Eastern Kentucky University with his MFA in Creative Writing and Murray State University with his Doctorate in English, he teaches English at the University of Mississippi and lives in Oxford, Mississippi and Chesapeake, Ohio.

Ronan opened one eye. The thick haze of fractured debris made his eyes burn.

He spat, trying to clear the dust from his nose and throat. He wiped the back of his uniform sleeve across his eyes and blinked twice. When the scene became clearer, he found the room had been reduced to rubble by the impact. A smoldering, jagged hole had ruptured the skin of the building, like a busted pipe.

Ronan stared at the ceiling. The force of the collision had buckled the outer wall of Clay Center and the spiral metal staircase had collapsed when the roof partially caved in on it.

Sore, but generally unhurt, Ronan noted thin streams of blood on his hand. Instinctively, he drew it closer. He felt warm tingling on his forehead. With the other hand, Ronan touched the area. A fresh speck of blood coated his fingertips. He began quizzing himself silently. He was able to recall his name, where he lived, and his birthdate. Although not exact, the impromptu assessment told him he didn’t have a concussion.

Ronan pulled himself up to a seated position. The atrium smelled of sulfur. Flecks of ruptured electrical writing hung loose from the ceiling and surrounding walls. Ronan could hear the pained groans of people around him. From across the room, a woman screamed, causing others around her to start trying to move.

Then it clicked. Ty. Ronan called out his name. He heard nothing but the dull buzzing of a bent streetlight that had been plowed over by the collision and now hung at an odd angle like a bowed tree.

Ronan called out for Ty again. The screams from the woman across the room subsided and she begged for help.

In moments of chaos and disaster, Ronan knew to focus on one task at time. The first order he gave himself was finding Ty. Ronan pulled himself to his feet. His vision blurred for a moment as a wave of dizziness overcame him. He closed his eyes for a second, held his breath, and waited for the blood in his head to equalize. Luckily, it worked.

Now clear-headed, Ronan looked around him. The scene resembled a war-zone. Tables had been overturned, the dais at the front of the room had been pushed back and shattered into the wall. Bricks and mortar speckled the floor. Dust was everywhere, clouding the air. Many of the guests were seriously injured.

The buffet table that hugged the wall in front of Ronan before the collision had been smashed. Food lay scattered across the room in colored clumps. Ronan took inventory of the damage. Near the far end of the buffet line, Ronan saw the man that had pointed into the plaza outside. He lay on one side, bent at his waist, with a large column of bricks and steel piled onto him.

Ronan raced over and lifted some of the bricks from his body and pulled back what pieces of steel he could grab. Ronan winced as a jagged piece of steel cut his finger, trickling a new stream of blood over his hand. Despite Ronan’s removing the excessive weight, the man did not move. After a few more seconds, Ronan was able to see the man’s face. It was badly smashed and the bones in his face had shattered like glass. Ronan reached down and placed two fingers on his neck. There was no pulse and his skin felt cold. He was dead.

This was the first discovered casualty. There would be more.