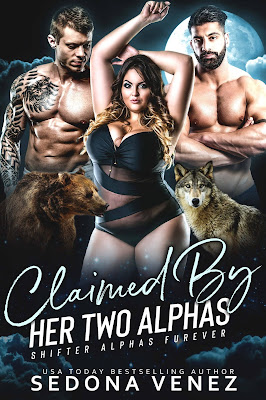 Inside this box set collection: 3 mfm shifter romance books that are ALL about her - no m/m:

** The Wolves Next Door

Two gorgeous were-bears, and one woman who gave up on the idea of true love a long time ago...

Down on her luck, plus size single, Sadie doesn’t ever think she’ll find love, so when her best friend Peyton offers to set her up on a blind date, she initially refuses.

Why would she waste her time?

Thankfully, Peyton isn’t taking no for an answer. She knows that Sadie needs to try something new and different if she ever stands a chance at letting go of her insecurities, and finally opening up her heart once again.

The twist? Sadie is about to go on a blind date with not one, but two dangerously handsome men who just happen to be joint-alphas of a were-bear shifter clan.

Dane and Jackson have been the best of friends ever since they were young cubs so when they are both made joint-alpha of their clan, they agree to share more than leadership; they want to share a mate.

For the two sexy were-bears, it's quite simple: convince the plus-size beauty that she is destined to be their mate, and they know just how to do it. Poor Sadie doesn't realize just how wild it's about to get!

Risha is your typical kick-ass girl.

She is as tough in the ring as she is out, and can hold her own against the guys. It takes a lot to knock her down.

Unfortunately, her ex-boyfriend cheating on her with an old friend from her college days managed to sucker-punch her in one of her few weak spots, hitting her where it hurt most.

Determined to find herself again and mend her broken heart, she sets out on a journey of self-discovery that leads her deep inside the shadows of Black Wolf Mountain. But what she’ll find in the mysterious caverns will open her eyes to a different side of herself that she’s never known, and it all happens in the arms of two handsome strangers.

Colt and Jericho are determined to invade Risha’s boundaries and push her into the deepest depths of her own forbidden desires. That is until a cruel hunter appears in their secret corner of the mountain and threatens to destroy them all.

The Wolves Next Door

The sexiest neighbors you could ever ask for...

When plus size single Julie moves into a strange town, nothing could prepare her for the dangerously handsome strangers next door who want nothing more than to claim her as their own.

What she doesn't know is that Caine and Ryan both hold a wickedly dark secret that threatens to change her life forever. 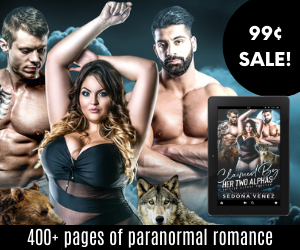