#CoverReveal - A Familiar Magic by @E_M_Rinaldi 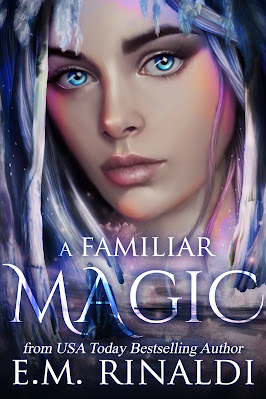 Kaya Thornton killed her best friend. On the run since the tender age of thirteen, she left the safety of her Community’s magicked walls and tried to disappear in the human world. Four years later, she’s found and dragged back kicking and screaming by Auden, her best friend’s older brother.

The second Prince of the Wardwell line is antagonistic and unforgiving, but surprisingly gentle as he forces her home to face the judgement of his father and the Council. She expected hatred and bitter punishment, not private training with a hot and cold Prince and…demonology courses?

Things are not as she left them. Her people are dying and the demon numbers are only growing. Once Witches and their Familiars are wiped out, who will stand between the Demon King and his bottomless appetite? Kaya has no intention of waiting to find out. And this time, she isn’t running. 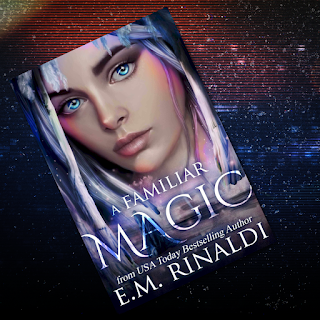 E.M. Rinaldi lives in Charlotte North Carolina with her husband, Milz, their psychotic pup, Boone, and slightly demonic toddler, Kylin. By day she is a Registered Radiologic Technologist taking pictures of mangled bones and by night she writes about all the bizarre situations her characters get themselves into while she was away. She is a Second Degree Blackbelt and can’t write a story without at least one fight scene in it.

When she’s not writing, or trapped at work, E.M. likes to read (obsessively), clear her DVR, and have all night Buffy marathons with her friends, complete with cookies and cinnamon rolls.

Her love for writing stems from an early age where she would create stories on an old computer program and force anyone within grabbing distance to read them. Not much has changed; be warned: stay out of grabbing distance. 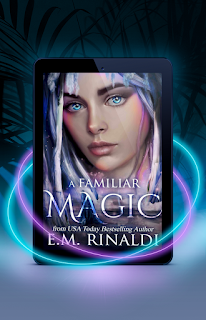 As I toed my foot to the side, careful not to draw attention my way, the change slowly left my body, leaving my fingernails dull and my eyesight horrible. Exhaustion ran heavy through my limbs, even though I hadn’t completed a full shift, the small change still took a lot out of me. My legs shook hard enough to knock me on my ass, and I wondered if I’d expended more energy than I’d originally thought, but when the ground beneath me continued to roll, I knew it wasn’t coming from me. Across the clearing, a tree unrooted and floated in the air above another witch. His black hair was darker than I remembered, but I knew those eyes, that face. Prince Auden, second son of the Wardwell line, flung the tree with nothing but a flick of his hand and smirked when it impaled the Amon.

Pinned to the ground, the lions wasted no time and got to work on ripping the demon apart. The sounds of torn flesh and painful cries would echo in my head tonight, I knew, but that wasn’t what worried me at the moment. Prince Auden was staring at me, staring like he remembered exactly who I was and knewwhy I was a wanted fugitive of my people. Before he could ensnare me with his power, I bolted through the trees and ran for my life. Literally. Something told me it wasn’t a coincidence that the prince happened to be here just in time to save me, which meant, they’d finally found me. The bustling city of Miami kept me hidden these past four years and I hated to leave it, but if I wanted to stay alive long enough to see my eighteenth birthday, I needed to make myself disappear. Again.