You don't want a nice guy.

The real guy you want to sweep you off your feet isn’t wearing a cardigan. He won’t remember your anniversaries or bring you hot chocolate on a cold night.

The guy you want is rough, rude, and hotter than sin.

Still, inexplicably, you’re madly in love with him. Why? Is the sex really that good? Why don’t you want the nice guy? The one you can actually take home to Mom and Dad? The one who smiles with his eyes, who will laugh at your jokes — even the bad ones? The one who will hold you after a hard day, who will run to your side even if it’s inconvenient, who will cherish and worship you like something priceless and precious?

It’s inevitable that guys like me lose hope in ever finding love. Capturing your heart isn’t easy when the world is full of countless jerks you’re so willing to give it to. What’s a nice guy to do when he’s playing a game you won’t let him win?

To tell my story properly, we have to start at the end. 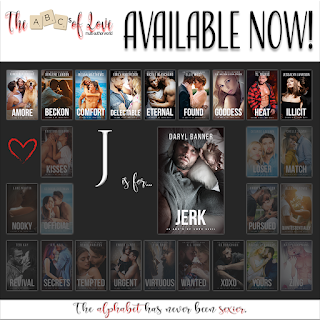 During Daryl Banner's time in college, he wrote, composed, and produced a musical under Tony Award-winning musical and Theatre producer Stuart Ostrow, as well as two original plays produced under the mentorship of Pulitzer Prize-winning playwright Lanford Wilson, who also mentored Daryl through the writing of his very first novel. In addition to new adult and M/M romance, Daryl also writes post-apocalyptic fantasy as well as dystopian.

- He is an obsessive self-taught pianist.

- He is a huge video game enthusiast.

- He left his day job of 10 years to tour with a 2-woman-1-man original musical.

- He's been remixing video game music for over 20 years. One of his remixes is featured in the major motion picture "The Spy Who Dumped Me". Check out his work here: http://www.youtube.com/DarylBanner

- He composes original soundtracks that accompany his books and series, including The Beautiful Dead and OUTLIER. You can enjoy them here: http://darylbanner.bandcamp.co

“Hey, Romeo.” He smiles, showing the tiniest dimples at the corners of his soft, velvety lips—or at least I imagine they’re velvety, from all the fantasies I’ve had about kissing them. “Your membership is about to expire in a few days, and I just wanted to check if—”

“Really? Awesome.” He goes to the computer and starts typing, then frowns. “Wish they’d update the system here. Last gym I worked at, all of this would be online or automated and I wouldn’t have to bug you.”

I prop my elbows on the counter. “Struggles of a privately-owned gym, I guess?”

My gaze dances down from his pretty, deep brown eyes to his tight polo shirt, the gym logo printed on it, right next to his shiny nametag: Danny Chen.

Danny is a nice guy. A real one. The exact kind I’d swipe right on—even if I knew there was no chance of him swiping right back. A guy I’d happily take on a date, hang out with for hours, laugh at each other’s jokes, and cuddle with while watching a movie neither of us are really paying attention to, our hearts too distracted as they drum with anticipation.

He’s the kind of nice guy where your happiest days aren’t even sexual. They’re emotional, sweet, and meaningful. They’re the mug of hot cocoa by a fire, and the blanket he thoughtfully wraps you in. They’re holding each other in a cushy old armchair that smells like every holiday season, me stroking his arm thoughtfully while telling him about my day. They’re us at a rescue shelter, picking out which sweet puppy to take home, and choosing what we’ll name him or her.

He’s the guy who makes it easy to believe in a happy-ever-after.

I can imagine it all with Danny, as if our life is a beautiful memory I haven’t made yet.

“You’re all set,” he announces with another breath-stealing smile. “Membership renewed.”

And despite all my doubts, I might even have the courage to ask Danny on a date, if it weren’t for one stinging, unfortunate setback...