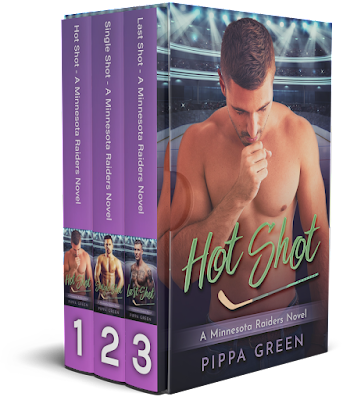 Love the Raiders? Want to start the series with our original three single dads? These hockey players will melt your heart and the ice as they work towards happily ever after. The box set includes books 1-3 with all the sexy, steamy, sports romance you could want!

When my sister told me she had hired a new nanny by the name of Esther to watch my rambunctious kids, I expected an elderly grandmother type.

I was completely wrong. Utterly wrong.

Esther Richardson might have been a child prodigy violin virtuoso in her youth, but right now she’s making waffles like a master and completely showing me up in every way possible. She’s also walking around in sexy outfits and making my life miserable.

As captain of the Minnesota Raiders professional hockey team, I’m all business. I’m Puck Daddy on the ice. At home, I’m trying to keep my hands off of Esther—and failing.

I haven’t had feelings like these for a woman since my wife died. Esther is my kids’ nanny. It’s wrong to want her this badly. Isn’t it? I no longer know.

One thing’s for sure: I want out of the Single Dad Hockey Players Club.

Can I convince Esther to give me a chance? To give us a chance to see where this goes?

I’m the goalie with the most athletic ability and I’m the most charming player we’ve got. So when our PR guru says she needs my help to babysit a journalist for a story, it’s no big deal, right? I have nothing against Fiadora Brown or what she does for a living, apparently she can’t say the same for me.

The sexy Ice Queen hates sports, especially hockey. More specifically, she hates hockey players. She hates me on sight (nobody hates me, and that’s a fact).This is going to be a tough two weeks, to say the least.

Two long weeks fighting with Fia and fighting my attraction to her.

Outside of the story, Fia wants nothing to do with me, or so she says. But she is saying one thing and doing another. Can anyone say mixed signals?

Soon it becomes clear she has a reason to hate hockey players. The woman is looking over her shoulder, running from her past.

Looks like I’ve got a single shot at claiming Fia’s heart before our two weeks are up and proving to her I’m not like the other guys, I’m so much more.

Is this a goal I can manage? Or will I bungle it before the buzzer sounds and my time is up?

It was love at first sight. The instant Victoria Newhouse took my hand, I was a goner. I wanted her with every fiber of my being.

Except she was the daughter of the team’s owner and I wasn’t allowed to want her.

Her father made that very clear, and if I wanted to keep my contract with the Minnesota Raiders professional hockey team, then I’d do whatever he said.

Fast forward nine years: Victoria now sees me as merely the grumpy Russian. I play well. I keep my head down. I make sure to stay out of trouble. Still, trouble seems to find me.

Fate throws me and Tori together again and again. It’s getting too hard to keep my hands off of her, to stop myself from kissing her senseless.

Especially when she starts to kiss me back.

The sparks are still there, but with threats of the past coming back to haunt us, I know I need to keep my distance, for her sake and for my kids. I know a guy like me isn’t allowed to have what he wants. And yet I don’t want to be the strong and silent type anymore. I want Tori today, tomorrow, and always.

This might be my last shot at redemption. And I’m willing to risk it all for love. 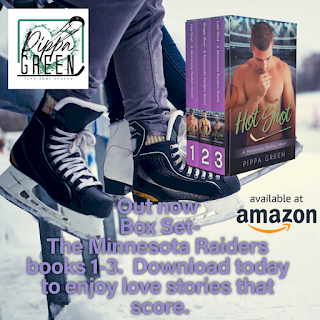 Pippa Green is the joint pen name for a USA Today bestselling author duo blending their uniquely sweet and sensual styles for romcom novels that delight and enchant readers. They share a love of romance, dirty jokes, and beach vacations (must include cocktails and chocolate). If they are ever together on the same side of the world, watch out! Talk about trouble. Their first published book, Lucky Shot, kicks off a fantastically steamy series following the Single Dad Hockey Players club and select members of the Minnesota Raiders team. Each book is designed to “knock your ass on the ice” and melt your heart along the way. 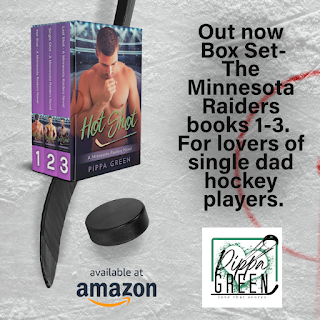