~Book Blitz~ Wrong Side of the Grave by Bryna Butler 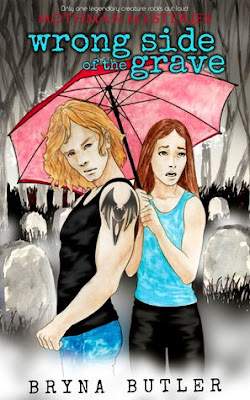 Blurb:
When Eric Jansen takes a seat behind his drums, every girl in the place takes notice. Not that he’s surprised. He’s had decades to practice. The guy is almost perfect. Still, there’s that one tiny thing…

Eric Jansen is an alien. Offworlder. Take me to your leader, fall from the sky, space invading, phoning home, UFO jockey. A swipe of the tattoo on Eric’s arm will reveal his true form which locals call Mothman, a winged creature formed of ashen gray skin and glowing red eyes. Eric is one of the last of his kind.

So when the recently deceased of Point Pleasant, West Virginia, start walking and talking, the Men in Black mark him as suspect number one. It will be up to Eric and his inner circle to solve the mystery before the black suits lock him up and throw away the key.
A fun read, Wrong Side of the Grave is a fast-action Teen Sci-Fi Mystery with a paranormal twist.
Parent Approved: Contains no profanity or sexual content. 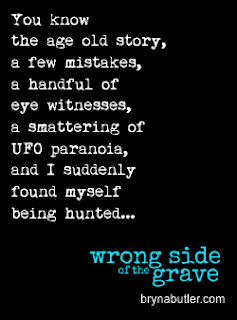 Bryna Butler is a journalism-trained writer having authored dozens of articles and financial publications before taking the leap into fiction in 2011. She holds a bachelor’s degree in Mass Communications from the University of Rio Grande where she received the Outstanding Communications Student Award for her graduating class.
Her first book, Of Sun & Moon, skyrocketed to number one on Kindle top free charts in the categories of Teen/YA Supernatural Mystery, Teen/YA Romantic Mystery, and Teen/YA Time Travel in the U.S. and U.K. when the title went to free status in 2014.
Self-described as a teen who refused to read, Butler often speaks to students on how to read for recreation and finding the books that are right for them. She strives to create characters that are relatable and feel the full weight of their choices.
Butler’s work is free of profanity and sexual content making them safe reads for pre-teen as well as teen readers. 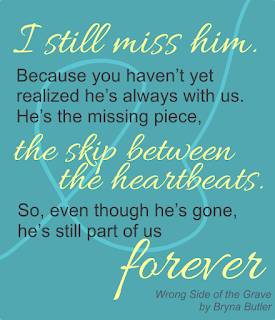