Title: On Loan for the Night (Guilty Pleasures Book 1) 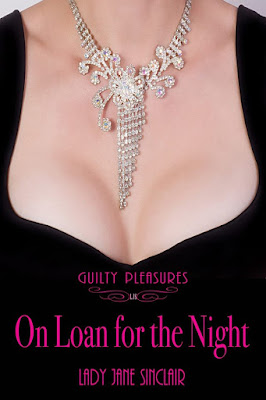 Blurb:
Lilly Peters was a doctor by day and escort by night. She was on her own at a very young age and had to put herself through Medical school, but when her grandmother took ill she needed money for her care. She had heard through the grapevine about being an escort for very rich influential men and jumped at the chance. What she didn’t know was how much she would enjoy having sex for money.


Follow Lilly and the other escorts in this series — they're going to be a lot of sizzling hot fun! Watch for the next book, coming soon.

L J Sinclair is an optioned screenwriter who loves to tell a story. She's been doing this for years but the Guilty Pleasures Series is her first Sexy Romance Series. She loves writing short stories about her characters and she's looking for a long career in the book market.
Her first experience in reading sexy stories were books her grandmother shared with her. Her grandmother loved Harold Robbins and Sidney Sheldon and so did she.

Lady Jane Sinclair's friends call her L J and she hopes her readers will do the same.
Be sure to follow her on Facebook and Twitter to find out about new releases and special offers.

Becoming an escort was the only decision Dr. Lilly Peters could’ve made. It might be unappealing to some, but for her it was the right choice. It paid the bills.

She would never forget her first encounter. They met at a small hotel in Chicago. Lilly was a little tired from being in the ER all day, but when she stopped for an espresso, she knew she’d be okay. Thank God for Starbucks!

As she sat sipping her coffee, she noticed an attractive guy giving her the eye. He was a little older than her, but he was extremely nice looking. He had straight blonde hair, bright blue eyes and he was built like an Adonis. He looked like he might’ve just come back from a vacation; his skin was tanned and had a healthy glow.

When he finally got brave enough to approach her, she learned that his name was Nick. He didn’t talk much, but Lilly was fine with that. What she had in mind for him didn’t require much conversation.

They went back to his hotel room, where he seemed a little nervous. “Would you like some wine, dear?” he asked timidly.

He has such a charming voice; maybe he should talk more. “No, thank you. I think I’d rather have you.” She was totally out of her comfort zone with this stranger, but it was also kind of exciting.

Should I talk or just get undressed? Maybe this isn’t for me. I should leave and forget this night ever happened. I can’t be an escort. I don’t feel sexy enough. The doubts ran through her mind until she noticed the way he was looking at her. The hunger in his eyes sent a signal straight to her core.

She went to him and kissed him lightly. He responded immediately and they continued to kiss for a while, until they both relaxed. She took his hands and led them to the buttons on her shirt. He deftly followed her unspoken instructions then took the initiative and also unhooked her bra. His hands were gentle, and the color of his eyes had deepened with lust.
She took a few deep breaths to get herself under control. How can I be so turned on by someone I don’t even know?

Apparently he felt the same way, because he pushed her down on the bed, raised her legs and took off her panties in one smooth movement. She could feel his warm breath and searching tongue as he began exploring her body. He’s hardly touched me yet, and I can’t believe how wet I am.

“You’re so very beautiful,” he whispered.

She was still a little cautious, but wanted more. He switched his focus to her breasts, and as he circled her nipples with his rough fingers, she could feel them harden. He wants me, and I defiantly want him.

Then, he was on top of her, and immediately inside her. She was on fire, and he was perfect. This is so much better than I ever imagined!

She liked it when he touched her hair and smiled afterwards. How can being with a stranger be so sensual? There was something special about this secret tryst. She’d never shared a bed with someone she didn’t know. It was a thrill and an incredible high. I’m in! This escort thing is definitely something I can do.