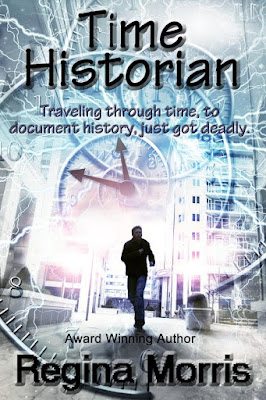 Blurb:
Hank's job at the Historical Preservation Agency is to send recorders back to President Lincoln's time to preserve the actual events of the signing of the Emancipation Proclamation. An unforeseen problem arises and within an instant he finds himself living in the Confederate States of America, Lincoln was convicted as a war criminal, and slavery existed for another fifty years. More personally distressing, in the new timeline Hank's wife dies as a child. He never meets her and their three children are never born. He travels to the past to right what went wrong, but is up for the task?

I’m a part-time writer who would love to quit her day job and become a full-time writer. Tea and chocolate fuel me so that I can write at night and on the weekends whenever I can find the time.

I have lived in many different parts of the world, and grew up on military bases. My father was career military and CIA; his father worked with the Secret Service. I graduated high school in Germany and I attended the University of Texas at Austin where I received a degree in Computer Science with a minor in math. My specialty is social media and I love connecting with people.

I do many giveaways and online parties with freebies and a lot of fun, so please join me on social media and subscribe to my newsletter.

“Did this mystery surge affect the timeline?” Hank asked.
“Doubtful. But something did change history. I compared the history database to the new timeline.” James pointed to the computer screen projected above his desk. “This,” he suggested, referring to the top portion of the screen, “is our original history. The bottom chart is the new history.”
“They’re so different,” Hank noted.
Caleb leaned in and adjusted his glasses. “These charts represent how many years?”
“I checked elections, dates, wars... any significant historical event and ran across two-thousand major differences within the first fifty years.”
“These graphs show only fifty years of differences?” Santiago’s eyes grew wide, and she stared at the group. “I’m married with two children.” Hank heard her voice cracking. “How bad is this?”
“After the recorder went back, the first historical difference is the Emancipation Proclamation. The directive did not go into effect on Jan 1st, 1863, and the thirteenth amendment abolishing slavery remained unratified until the 1930s, which made it the twentieth amendment.” James stared grimly at the group. “Slavery remained legal until then. This caused many of the northern states to secede and join Canada.”
“Oh my God.” Hank wrung his hands. His late wife had been African-American. Caleb was also African-American. “How could the United States allow slavery to continue for so long.”
“Not the United States. We now live in the Confederate States of America. The South won and convicted Lincoln as a war criminal.”
Hank couldn’t believe his ears. Lincoln was a personal hero of his. How could such a fate belong to him?
“The American people loved Lincoln,” Aaron argued.
James shook his head. “Not everyone. His murder occurred a few weeks after his conviction.”
No way. Hank needed to take a seat. How could this have happened? The device they sent back was only a little recorder.
“We need to isolate the event that caused the rift.” Caleb pointed at the timeline displayed on James’s computer. “Did you pinpoint the catalyst?”
“It proved difficult to track down, but I’ve isolated the one event. A murder occurred in the White House immediately after the recorder arrived in 1862.”
“No one has ever been murdered in the White House,” Hank said.
“True. But this,” James said as his hands gestured around the room, “this is now Preston Hall. This isn’t the capitol.”
“Who was murdered?” Santiago asked.
“An African-American maid. Her death is the start of all the changes.”
“Okay.” Caleb glanced around the room at all the equipment, then he took a deep breath and let it out slowly. “There’s only one thing to do. Hank needs to go back in time and save her.”