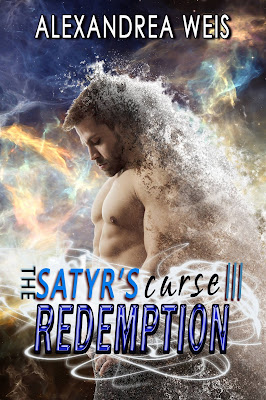 Blurb:
Since returning from Fairview Plantation, Jazzmyn Livaudais has noticed strange occurrences in her Garden District home. She attributes the ghostly happenings to Julian Devereau.

Trapped in a world between death and life, Julian waits. Jazzmyn is torn between her feelings for him, and her impending nuptials to her temperamental chef, Kyle Baker.
But before she can consider Julian’s fate, she must deal with a detective eager to solve the horrific murders of women that have plagued New Orleans for decades. The detective suspects Julian is the killer, and his frequent visits to The Sweet Note are putting everyone on edge.

With Julian’s time running out, Jazzmyn discovers there may be another spirit hanging around her home. One who is out to settle an old score.
Will Jazzmyn rescue Julian from his self-imposed limbo? And what will happen if he returns?

When one curse ends, another can begin. Beware The Satyr’s Curse. 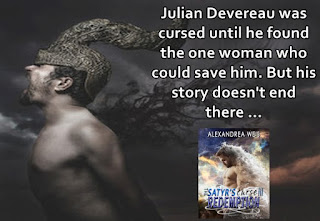 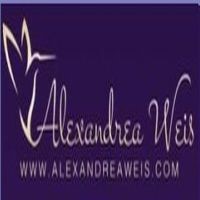 From New Orleans, Alexandrea Weis was raised in the motion picture industry and began writing stories at the age of eight. In college she studied nursing and went on to teach at a local university. After several years in the medical field, she decided to pick up the pen once again and began her first novel, To My Senses. Since that time she has published many novels. Infusing the rich tapestry of her hometown into her award-winning books, she believes that creating vivid characters makes a story memorable.

Alexandrea Weis is also a certified/permitted wildlife rehabber with the La. Wildlife and Fisheries. When she is not writing, she rescues orphaned and injured wildlife. She is married; they live in New Orleans. 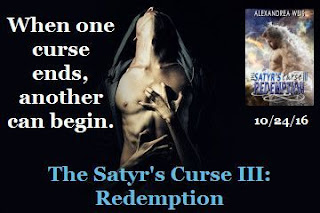 “Do you miss the demon, Jazzmyn?”
“He’s not a demon.” Jazzmyn carefully weighed her words. “Do you think …? I keep wondering if he’s all right.”
Ms. Helen’s unsettling sigh carried through the bedroom. “That satyr man has crossed over. He’s where he’s supposed to be.”
“Is he?” Jazzmyn questioningly raised her eyebrows.
“Do you know somethin’ I don’t, child?”
Jazzmyn motioned to the newest daisy painted on the wall. “That just appeared last night.”
Ms. Helen inspected the flower. “I thought you said you painted them daisies.”
“No, that’s what I told Kyle to keep him from asking too many questions. I can’t paint. They just appeared.” Jazzmyn rubbed her hands together. “They’re a lot like the ones Julian put in Jackie’s bedroom at Fairview Plantation. If I didn’t know better, I’d say they’re exactly like the ones he painted.”
Ms. Helen spun around. Her coffee-colored skin paled.
“That’s not all. Last night, Kyle found Odette’s painting hanging sideways on the mantle. This morning, the coffeemaker had been turned on and filled with coffee before either one of us got up.”
Ms. Helen’s brown eyes grew in size. “Do you think it’s the demon?”
“Who else could it be?” Jazzmyn gestured to the flower on the wall. “He had a fondness for painting, loved coffee before he was cursed, and who else would turn Odette’s picture on its side like that?”
“What you’re suggestin’ would mean he’s finding a way back to you.”
“But when I came back from Fairview, you said he was trapped. How can he come back?”
“I’m not sure. I’ve never seen such a thing.” Ms. Helen knitted her brow. “You told me he was the one who threw the pot on the fire, not you. And you never spoke the words banishing him.”
“Yes, the curse was lifted, and he disappeared into a ball of green light after the pot exploded.” Jazzmyn tossed up a hand. “So?”
“If the ritual wasn’t completed, that might allow him to move back and forth between this world and the place where he’s trapped,” Ms. Helen warned in a dark voice.
Jazzmyn shivered as if enveloped by an icy breeze. “Which means he might be trying to get back to me.” She faced her daughter, sitting in her crib. “Back to Jackie.”
“Julian’s paid his debt to your family and to those he wronged, but you didn’t force him out of your life, Jazzmyn. Julian sent himself away. That tie to you and his daughter may have left a door open somewhere.”
“What door?”
Ms. Helen waved her hand high in the air. “The door that lies between this world and the next. A portal through which spirits can cross over.”
“Because I didn’t complete the ritual, he’s able to come back and forth through this door?” Jazzmyn gripped the railing of Jackie’s pink crib. “Are you sure about this?”
Ms. Helen put a reassuring her hand on Jazzmyn’s shoulder. “He’s bound to you and his daughter. It’s those ties that probably kept him from crossing over completely.”
“Is Julian a ghost, haunting my house?”
“Ghosts are dead people trapped on this earth, but your demon ain’t dead. Far from it.”
Jazzmyn was overcome by a wave of dizziness as what Ms. Helen was proposing sunk in. “Are you saying he’s alive, physically, somewhere?”
“If you’d performed the ritual like Ms. Evangeline instructed, your satyr man would have been sent to his rest. His physical body would have died. But you didn’t perform the ritual, at least not all of it.”
Jazzmyn glared at the woman, dumbfounded. “You never said anything about his being alive and trapped. I thought he was a spirit, and no longer living.”
Ms. Helen sighed and looked Jazzmyn up and down. “So do you want to get rid of your satyr man for good?”
Jazzmyn said nothing but glanced down at her baby in the crib.
“What about your crazy chef?” Ms. Helen pressed. “Kyle plans on marryin’ you in October. You got any idea what you’re gonna tell him?”
Jazzmyn sagged against the crib, unable to bear the weight of her emotions. “I don’t know what I feel for either man right now.”
“You’re gonna have to decide, Jazzmyn. Sooner than later, you’ll have to let one man go.” 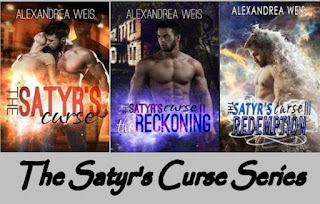