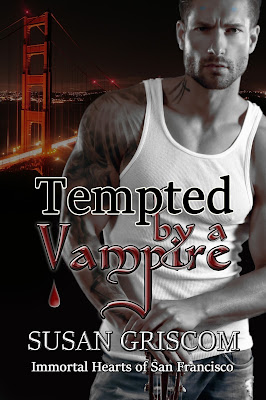 Blurb:
Enter a world of temptation and lust,

where rock stars are not only gorgeous and sexy, but they're also vampires.

Cian DeMarco, has lived in his beautiful mansion overlooking both the San Francisco Bay and the Pacific Ocean for the past seventy of his two-hundred and twenty years of his existence. Happily--or so he thought, preying on a different woman as often as his heart desires. Until the beautiful Magdalena De la Rosa sits down at one of the front-row tables in Club Royal where he and his band mates perform once a week. The scent of her blood has him completely undone and he's unable to contain his desire for her.

A temptation they can't resist, leads to a future they never imagined as sparks ignite between the two until a threat from Cian's past returns to wreak havoc on Cian's and Magdalena's lives.

Will the desire to be together outweigh the reality of what Cian must do to keep Magdalena safe? 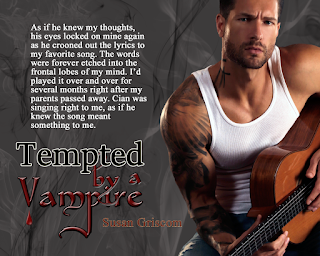 She lives in Northern California in wine country and one of her favorite weekend excursions is wine tasting with the love of her life. Together, she and her romantic husband have five great superhero kids and eight mini-superhero grand kids, so far.
Author Links:
Website: http://susangriscom.com
Blog: http://swblog.susangriscom.com
Twitter: https://twitter.com/SusanGriscom
Facebook Author Page: http://www.facebook.com/SMGriscom
Amazon Author Page: http://amzn.to/2efYV8l
Facebook personal:  https://www.facebook.com/SMGriscom
Goodreads: http://www.goodreads.com/SusanGriscom 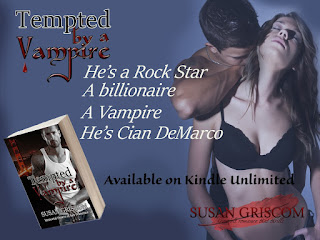 “I’m not going to pretend that I’m not interested in getting to know you better. I think, if you stay, you’ll learn that I might have more to offer than that boyfriend of yours.” As difficult as it was, I’d been trying very hard not to read her thoughts. For some reason, invading that part of her, when I felt it was perfectly acceptable for me to do it with anyone else, seemed wrong.
“Is that so?” Her eyelashes fluttered open as she looked up at me, revealing her beautiful blue eyes full of…desire?
“Yes.”
“You certainly are sure of yourself.”
“I have nothing to lose, Maggie.”
“Now it’s Maggie?”
“I’m sorry?”
“Well, I was just getting used to the way my real name sounds when you say it.”
“Ah. Well, then, I will try to make a conscious effort to call you Magdalena.”
“You are a temptation.”
“Whatever it takes, Mags.”
“Now you’re just being mean.” She laughed. “Your charm, or your lack of charm, whichever one you use, isn’t going to make me stay.”
“Do you want to leave?”
“Not really. But I need to.”
I pressed my lips briefly against hers, just to see what would happen. As I guessed, she didn’t resist. “You do have a choice, Magdalena. Come.” I took her hand in mine. “One more dance, then you can leave. And even though you’ll be breaking my heart, I’ll even pay for your cab home.”
She followed me to the dance floor, and I took her in my arms. As I held her close, inhaling her intoxicating smell, she whispered in my ear. “Cian, I wish I could stay. I really do.”
“Shhh. No talk of leaving. Let’s just enjoy the moment we have together.”
When the song ended, I took Magdalena’s hand and walked her through the hallway that led to the outside. It was dark and I couldn’t resist one last shot at exploring her luscious body. I stopped and turned her to face me. I stepped closer, pinning her gently against the wall, and covered her lips with mine. This kiss was much different than the brief skimming I’d allowed myself earlier.
This kiss held all the allure I wanted her to feel, along with the promise of what could be if she only allowed herself the pleasure.
The cleavage protruding from the top of her dress left me weak in the knees, and my lips found their way to that spot as if they’d been possessed. I kissed the tops of her breasts, and she kissed my neck right below my ear. My fingers ached to touch the skin beneath her silver dress, and I moved to do just that. I found her thigh soft and silky. Almost as silky as the material she wore. My fingers inched up her thigh, massaging gently. I waited for her to stop me. I could have compelled her to let me do whatever I wanted to, but this woman was different. I wanted her to want it. To want me. When she didn’t stop me, I skimmed my forefinger along the edge of her panties and slipped it between her thighs, finding her oh so gloriously wet. My gods, she was stunningly beautiful.
My cock stiffened, a prisoner locked behind a zipper of steel.
“Cian,” she breathed against my neck, and I silenced her with my mouth, exploring every inch of hers, tasting, taking what she seemed so willing to give me as my finger teased the soft skin of her thigh just outside of her very wet undergarment. “I need to go.” The dreaded words flowed from her swollen lips like poison to my soul, and I had to fight the too-easy urge to compel her to stay. 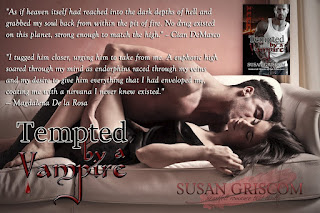 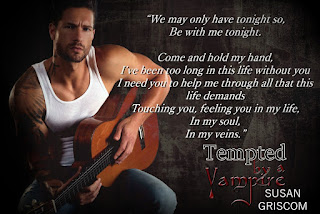