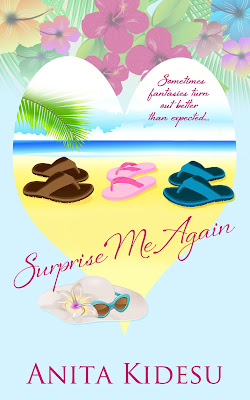 Blurb:
Charged with trespassing and indecent exposure on Erik Stenson's private beach, Carson and Josie Sanberg return to South Padre Island to attend the court hearing. However, their reunion with Erik is not what they expected. An invitation for a drink turns into a weekend of passion that fulfills fantasies and leaves all parties wanting to explore more than bedroom bliss. Will time, distance, and family issues stand in the way of a relationship, or will they be surprised again? 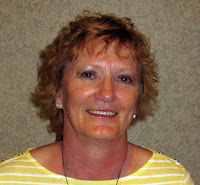 Anita has been writing for years and finally decided to try her hand at erotica. She found that writing "romance with an edge" an enjoyable genre.

Anita is single and lives in Wisconsin. Her family consists of a hamster and two cats who love antagonizing the hamster.

“I wanted to see you guys again.”

Eric had. Hope bubbled in Josie. “Why?”

Eric shrugged. “I liked you. I liked the proposal you offered. Still do.”

“You mean”—Carson leaned closer to Eric, glanced over his shoulder, and lowered his voice—“joining Josie and me in the bedroom.”

A grin spread across Eric’s face as he took a quick glimpse at her chest, then her face. “In the bedroom, living room, bathtub, car, pool, or anywhere else you want to take this.”

A spiral of desire hit Josie in the chest, swirled around her nipples, danced through her stomach, slid over her pubic bone, and settled in her pussy. Could the men see her nipples harden through her sundress? Probably not. Even though the top was low-cut, the cups were padded, but they definitely pebbled at his words.

“I don’t know if this is still something you two want, but if it is, and you still want me, I’m available. And just so you remember what that means…”

Josie gasped when Eric leaned into her, putting his mouth to her ear.

Josie nearly melted on the spot.