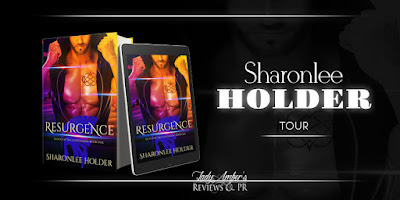 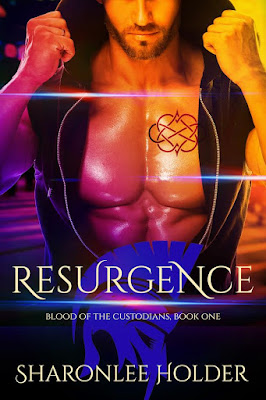 Blurb:
It’s been a thousand years since the Fates forced the gods into exile. Now they are preparing for war. A prophesied weapon is sought by both sides.  Eros and the resistance want to use it to win their freedom, while the Fates seek to find it first and destroy it.  Antara is the Tracker Eros needs, and finds herself drawn into a world she never knew existed—with feelings she may not be ready for.

South African, born and bred, Sharonlee Holder lives in one of the outer suburbs of Johannesburg in Gauteng, South Africa.Life is a happy and creative jumble of a husband, three grown daughters, one super cute grand-daughter, three dogs, a cat, and a mouthy African Grey parrot.Endless hours at the keyboard are supported by copious amounts of frothy coffee and ‘What ifs?’. Writing breaks are a blend of the big outdoors astride a motorbike, reading or watching anything and everything to do with fantasy, romance and the paranormal. 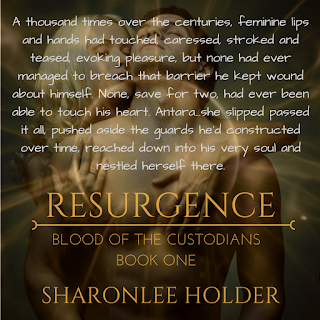 The moon had crested to its zenith. It hung suspended in the sky, closer to dawn than midnight, when Antara opened her eyes. Myth and magic greeted her sleepy gaze through the gap in the floor length curtain drawn to one side.  Ross was out on the balcony, with his hands curled over the railing. His wings were free, bathed in a moon river that painted him silver. Only the tips of his feathers stirred. Rippling like liquid metal under the caress of a subtle pre-dawn breeze.

Her breath caught and stalled in her lungs. It wasn't so much the sculpted perfection of his physique that did it. Rather, it was the ethereal reminder that the man out there was anything but human. In his rightful form, in an unguarded moment like this where even the moon couldn't resist touching him, she understood why there were those that had worshipped him as a god.

Beneath the layers of hedonistic indulgence smoking through his voice, lay a deeper note of gravity that intrigued her.

Naked, she slid out from under the light covering of the sheet, stood, and reached for her robe.

She let the silk garment fall to the floor and stepped out onto the balcony wearing only a shy smile. She took his hand. Warm, capable, and elegant fingers laced through hers.

“What if someone sees us?” she whispered.

He smiled, drew her in closer against the hard wall of his body and curled his wings about her. She shivered beneath the sensual brush of feathered tips over her ass and the backs of her thighs.

“Then they will know that you are mine.”

He let go of her hand and wrapped his arms around her. She circled hers about his neck and stared up into his eyes, drifting away in the endless ocean of exquisite blue. The weapon, Hermes, Diana, Apollo, the war they had spoken of… everything melted away until there was only the two of them.

Warmed by his feathered embrace, she became aware of the air cooling her extremities—feet, forearms, and fingers, laced at the nape of his neck. Antara looked down and gasped. No longer were they on the solid balcony running the length of the windowed wall, the penthouse lay far below. Instinctively, she tightened her grip.

“How…?” She looked back up at him to find his gaze hadn’t left her. “Your wings aren’t moving,” she whispered in awe.

“I let go and trust the universe to catch me,” he replied, with the mysteries of antiquity shading his voice.

He held her there for a while, hovered high in the air. Below them, the slumbering neighbourhood spread out a glittering quilt of street lamps and traffic lights. She felt the moment he decided upon movement. It was there in the sudden release of power that surged through the thick slabs of muscle coating his chest, shoulders, and back. His wings unfurled from around her, stretched to their fullest extension, and then swept through the air.

Antara bit her lip and screwed her eyes shut. He laughed. Deep and melodious. The sound of a thousand summer nights spiced with cinnamon, kissed with myrrh and cooled with rain. Forcing her eyes open again, the expression on his face was joy in its purest form. It shone from his pores and lit up his eyes, stretched his grin wide and…melted her insides.

“You love it, don’t you?” she whispered, soaking in the sight of him revelling in the freedom of flight.

His head turned, and his mouth found the side of her neck. Hot breath fanned her skin when he replied, “Flying is best with love in my arms.” 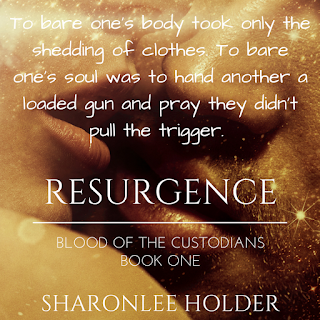 It took some cajoling on my part, but Ross and Antara, the main characters from, Resurgence, have agreed to an interview ahead of its release. There were, of course, conditions. One, I could only ask questions that wouldn’t result in spoilers. Two, I had to agree to do the interview at a secret location of their choosing.

The lid of my laptop slams shut, almost catching my fingers. “Hey!”

“I’m not so sure you understand the meaning of the word secret,” Ross states giving me the hairy eyeball.

“Fine,” I grumble, lift my foamy mug of cappuccino and open my laptop again. “Ready to lay it all out on the table?”

Ross delivers a wicked grin and my insides melt. I shoot him a dirty look. He laughs. Antara pinches him and tells him to behave. He gets that look on his face. The one wreathed with carnal sin that should be illegal to wear in public. Antara leans closer to him, her hand on his thigh and whispers something in his ear. His grin goes supernova and he leans back in the booth looking smug AF.

I clear my throat and make a show of consulting my notes. “Right, so, Ross, this one’s for you. Can you tell the readers what the issue is between you and Apollo?”

He frowns and purses his lips. Antara straightens and fixes him with a questioning look. So, he hasn’t told her yet either. Interesting.

“It was his own bloody fault,” Ross begins. “He kept going on and on about how he was better with a bow and arrow than I was and that the only thing I could was the broad side of an elephant.”

Antara bites her lip, lifts her mug and glances at me over its edge. Yup, she, like myself, is trying very hard not to laugh. I keep my head down, pretending to type and wave for him to continue.

“So, I shot him in the ass with a gold arrow. Figured maybe he’d clap eyes on a goat or something and that would be that. Next thing I know, this water nymph named Daphne pops up out of nowhere and the mouthy fucker falls in love with her instead.”

Antara asks the question for me. “Yes, and? I don’t get what the big deal is?”

Ross’ features harden. “Apollo became so besotted with her that he started to shirk his Custodial duties. Zeus called a meeting of the other members of the Twelve who made the decision to separate them. The task fell to me to carry out. I had no choice.” His gaze shifts to Antara, glimmers of regret in impossibly blue eyes. “I shot Daphne with a black arrow.”

Antara presses her fingers to her lips, expression horrified. “You killed her?”

Ross shakes his head. “No. Reckon that would’ve been kinder. It made her hate Apollo. It became this vicious circle of him pursuing Daphne and her running from him. After a while, I felt bad for him so I helped him to hunt her down. But it was too late, Daphne’s father Peneus, a powerful river mage had taken pity on her and turned her into a laurel tree. Apollo swore from that day forward that he would love no other and holds me directly responsible for Daphne’s fate.”

A sombre mood settles over our table in the corner of the coffee shop.

“But I still have questions,” I object.

“Perhaps another time,” she replies.

Ross stands with her, handsome features giving little away, his smile forced when he shakes my hand. He holds it a little longer than is necessary, his gaze penetrating and I am reminded in that moment, that the story has only just begun.