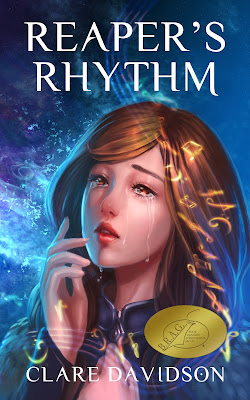 Blurb:
When everyone thinks your sister committed suicide, it’s hard to prove she was murdered.

Kim is unable to accept Charley’s sudden death. Crippled by an unnatural amnesia, her questions are met with wall after wall. As she doubts her sanity, she realises her investigation is putting those around her in danger.

The only person who seems to know anything is Matthew, an elusive stranger who would rather vanish than talk. Despite his friendly smile, Kim isn’t sure she can trust him. But if she wants to protect her family from further danger, Kim must work with Matthew to discover how Charley died – before it’s too late.

I bought this paperback about 2/3 years ago when it was first released and have just now gotten to read it. I don't know why I waited so long, the book was soooo good. I loved the twist with fantasy. I think the only thing I was disappointed about was, I wanted so much more LOL especially romance. I loved the characters, especially Matthew. He was definitely my favorite. I wanted to like Kevin, however, his betrayal was too much to really like him. Once I started Reaper's Rhythm it was hard to put it down, the suspense was killing me. I really didn't think the person responsible was who it ended out to be. I wanted the blame to go on someone else, but I love when a book isn't so predictable so in that sense, job well done. I would love to read more of this series and see where things go, I really want to see more with Matthew. 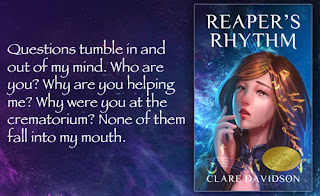 Charley’s lying on the bed, her blond hair fanned out over the pillow. Her arms are spread wide, palms up. Crimson blood drips from deep slashes on her wrists. Her blue eyes are open, staring at the ceiling. But they don't see. They're dull, empty.
Dead.

The room spins. My stomach lurches and bile rises up my throat. I swallow and clap my hand to my mouth. Sagging against the doorframe, I can’t tear my gaze from the single lock of hair resting over Charley’s porcelain cheek. What should I do?
Charley would know what to do.

As I stumble down the stairs, my mind clicks into gear. A scream rips out of my throat, eclipsing the pounding music. My foot slips on the beige carpet, sending me tumbling down the remaining stairs. My shoulder and back slam against the wall. I scramble to my feet, screaming, sobbing, then stagger into the hallway, colliding into a young man with the darkest eyes I’ve ever seen.

My own force knocks me backwards. His strong grip clenches my arm, preventing me from falling. I try to scream again, but the sound is trapped within my constricting chest. My sister is dead. A stranger is in my house. 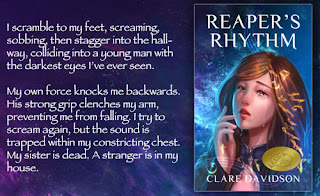