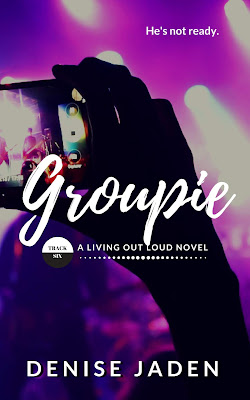 Blurb:
Kass, never in a million years, would have pictured herself as someone’s groupie, but when Eli and his band score a spot on the hot new reality TV show, Hold That Note, she decides to surprise him in L.A… and hopefully win back his heart.

OMGEEEE! I so can not get enough of these characters, each book starts up where the last one lets off pretty much. And the way Groupie ends, you're gonna need to hurry and get the next book, which isn't out yet and I desperately need!!! Eli and Kass has reached an all new with their relationship, they're "friends". They text often, its where they tell their truths, but in this installment, they open up more. Eli and the band have been given an amazing opportunity and Kass is there for support but her insecurities are getting in the way of what her and Eli could have. The Living Out Loud series has become one of my favorite YA Contemporary Reads of 2018 and I can't wait to see what's to come next. I need more!!

As we enter the massive hotel lobby, the hotel manager greets us, and instructs us to pack up.

“The studio is moving you to a suite.”

I raise my eyebrows at Jeff as the manager hands us four new key cards.

“Room 1182.” He smiles and holds a hand out to me. “And may I be the first at the Hyatt to offer my congratulations.”

After he shakes all of our hands, I grin, stupefied, as we make our way to the elevator.

“I wonder what perks we get if we make it through next week,” Jeff says.

“We’ll make it through next week,” Sebastian tells him, always the optimist. “Eli can bring the high. Right, dude?” He nudges my shoulder.

I nod, but can’t bring myself to answer.

We pack up in a flurry of bags and clothes and toiletries. I grab everyone’s toothpaste and toothbrushes from the bathroom sink, figuring we’ll sort them out upstairs. Sebastian and Jeff grab their still open duffel bags and head for the door.

“We’re gonna check out the new digs.” Jeff is already halfway to the elevator.

I’m eager to see it too, but if I know Jeff and Sebastian, they won’t bother coming back down once they’re comfortable in our new suite, and there’s still a lot of stuff left behind. I find shoes in the closet that aren’t mine and a watch in the night stand drawer.

Sonny crouches to roll the sleeping bag he’d prepared for himself on the floor. I fold my clothes so they won’t wrinkle too badly and place them gently into my bag.

When I’m done with my clothes, I head to do a last check of the bathroom while Sonny double-checks under the beds. A knock sounds at the door, probably housekeeping, coming to see if we’re out yet.

“Can you let them know we’ll be done in five,” I call to Sonny.

He grunts out a yes. As I’m leaning over the tub to grab Sebastian’s shampoo bottle, he calls out, “Uh, Eli…?”

I roll my eyes. Even though Sonny’s a year older than both Sebastian and I, he seems the least schooled in life experience.

“Just tell them…” I say as I come out of the bathroom.

And then I promptly drop Sebastian’s shampoo bottle. I don’t even notice if it opens or splatters onto the carpet.

We stand there in the open doorway, holding each other. Her heart beats rapidly against my chest, and it might be a minute later, or it might be an hour when it starts to slow.

“You came,” I say, eventually.

“Yup,” she replies in her tough voice, and maybe it’s my need to balance her out, but my reply comes back velvety soft.

“Mmm,” she replies, which I’m well aware is the closest thing I’ll ever get to “I’ve missed you too, Eli.”