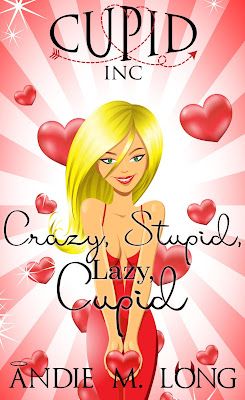 Blurb:
Cupid’s have targets other than hearts…

After cheating on her monthly figures, Samara finds herself sent back to Cupid training school by the big boss himself. If she’s to pass her probation, she’ll have to prove she is capable of creating genuine love matches.

But things don’t get off to a great start when she finds out that pets aren’t allowed in school. Difficult when your husband has been turned into a Whippet until you’ve proven yourself.

Someone should have known that the crazy, stupid, lazy, cupid would try to find a short cut. It’s a walk in the park to create new romances, and she can exercise Johnny at the same time.

But not everyone wants Samara to succeed. Someone is waiting to take the lead… 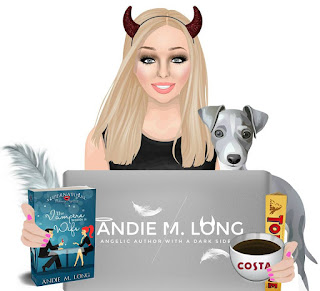 Andie M. Long is author of the popular Supernatural Dating Agency series amongst many others.

She lives in Sheffield with her son and long-suffering partner.

When not being partner, mother, writer, or book editor, she can usually be found on Facebook or walking her whippet, Bella.

“Okay so it’s time to introduce the person to your left. They should have told you enough about themselves right now.” Martine, the uber-happy, bouncy pony-tailed teacher instructed us.
I was not uber-happy, or bouncy. I was super pissed off.
“Samara, could you introduce the person to your left?”
Yeah, pick on me first why don’t you?
Sighing and blowing air above my top lip, I pointed to the woman next to me. “This is Janet.”
She shook her head. “No, no. Jeanette.”
I rolled my eyes. “This is Jeanette. She’s been sent back to Cupid classes because she did something dumb.” I didn’t know what it was but if she hadn’t she wouldn’t be here.
“Well, let’s not use the word ‘dumb’ shall we. Jeanette just-”
“Fucked up?” I stated trying to be helpful.
“Let’s move along. Max, could you please introduce Samara?”
Max beamed like the goody-goody twat he was. From now on I was calling him Vax, due to his sucking skills and being full of crap.
“Samara is here because she set up Taylor Swift with Tom Hiddleston and we all know what a car crash that turned out to be.” He elbowed me. “I knew that wasn’t real. Did you give him the t-shirt? It looked like it could fit you?”
Martine’s face clouded over. Yeah she wasn’t so happy now was she?
“Samara did not set up Tom and Taylor. That is an outright lie.”
I folded my arms over my chest. “Well someone must have done it. Seriously ruined Tom for a lot of women she did.”
Martine stomped out of the carefully constructed circle of chairs she’d made us put together and grabbed a thick file from her table. Then she stomped back in.
“Here we go. Samara Leighton. Reasons for being back at Cupid Inc. Training Headquarters.

Samara’s behaviour towards her local colleagues resulted in one colleague being ridiculed and having to seek counselling. I quote. ‘What kind of person draws attention to an unfortunate mishap of another? Samara is crazy’.”
“Crazy is not waxing your vagina and then sitting with your legs apart in a spa.” I informed everyone.
“Samara engineered a speed dating event prior to the opening of the dating agency in Withernsea and we believe saw a man she liked there herself. She then ‘accidentally’ turned up on his date. This man is now her husband. Now, fortunately the date she ruined wasn’t fated anyway, but what she did that day was stupid.”
“We’re madly in love. The best match ever.” I looked at the other faces sat around. “Well we were. Now my husband is in kennels. KENNELS. They turned him into a dog.”
Martine carried on. “Samara’s monthly inputted figures included those pairings from Withernsea Dating Agency, run by Shelley Landry, with no actual input from Samara at all.
“It says pairings for the month. It doesn’t specifically say my pairings. That’s on Cupid Inc. They should be more specific.” I complained.
“It’s lazy, Samara.”
“So I’m Samara. I’m crazy, stupid, and lazy. That’s how you need to announce me to all the others, Vax.”
“Max.”
“What-ev-er. My introduction is complete.”